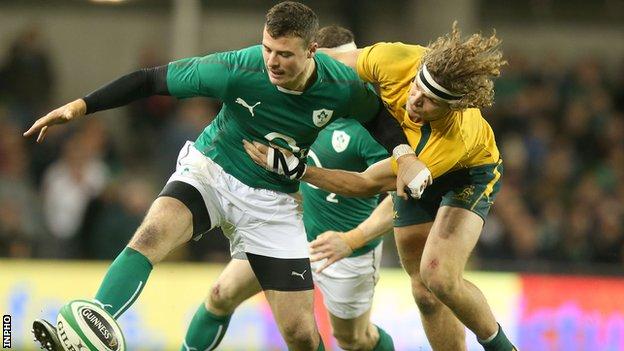 Ireland international Robbie Henshaw has agreed a two-year contract extension at Connacht which will keep him at the Irish province until the summer of 2016.

Henshaw, 20, made his Ireland debut on this year's North American tour and earned his third cap in the recent game against Australia.

The ex-Westmeath minor GAA footballer can play full-back or centre.

"It's been an unbelievable 15 months," said Henshaw.

"I'm so happy that I was given my first chance here at Connacht and can now continue to improve under Pat [Lam] and the coaching team.

"I'm absolutely delighted to have signed a new contract with Connacht.

"Playing for Ireland recently was a huge honour and I was so proud to be representing my home province as well as my country."

Athlone-born Henshaw joins team-mates Kieran Marmion, Willie Faloon, Craig Ronaldson and Matt Healy, who all recently penned two-year deals that will see them play at the Sportsground until at least 2016.

Lam spoke of his delight that Henshaw has committed his future to Connacht.

"He is an extremely talented young man and is constantly improving as a player," added the Connacht coach.

"Robbie has proven himself to be one of the best young players in the country and I have no doubt that he will continue his remarkable career both with Connacht and Ireland."

Henshaw made his debut for Connacht against the Cardiff Blues in September 2012 and he has made 30 appearances for the Irish province.