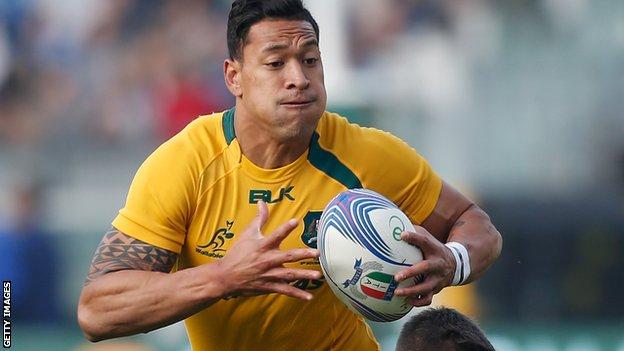 Alex Cuthbert believes Australia full-back Israel Folau will be the biggest threat to Wales when the sides meet on Saturday.

Folau, who can also play on the wing, has scored nine tries in 14 Tests since switching from rugby league a year ago.

British and Irish Lions wing Cuthbert has been recalled to the Wales team after recovering from an ankle injury.

"He's the danger man, the man in form and probably one of the best players at the moment in rugby," Cuthbert said.

"He's improving every game and he's the player we've got to mark closely and obviously try and keep him away from the ball as much as possible.

"He's been managing to get the ball a lot and putting Australia on the front foot so if we can stop him then I think we can try and stop Australia.

"They're a quality side and you can never keep them down. It's going to be a tough game at the weekend.

"They're going to look to finish their tour with a win against us so it's going to be a big battle."

Folau has started at full-back in Australia's four games on an autumn tour in which he has scored two tries.

The 24-year-old made his Wallabies debut against the British and Irish Lions in the first Test in June.

The NSW Waratahs player scored two tries in a match in which Cuthbert also crossed for a try in the Lions' 23-21 victory.

Cardiff Blues' Cuthbert was not expected to feature for Wales in the autumn Tests after suffering an ankle injury against Toulon in the Heineken Cup in October.

The 23-year-old is one of nine changes to the side that beat Tonga and is pleased to feature in Wales' final game of the autumn.

"When I first got diagnosed with my injury they said there would be no chance of making any of the autumn Tests," Cuthbert added.

"The first couple of weeks I thought that and then as I progressed it was feeling good and I thought 'I'm in for a chance here'.

"I've worked hard the last couple of weeks to try and get to this point now.

"I'm glad to be back with the boys. We're a close-knit bunch of guys and looking forward to the weekend."