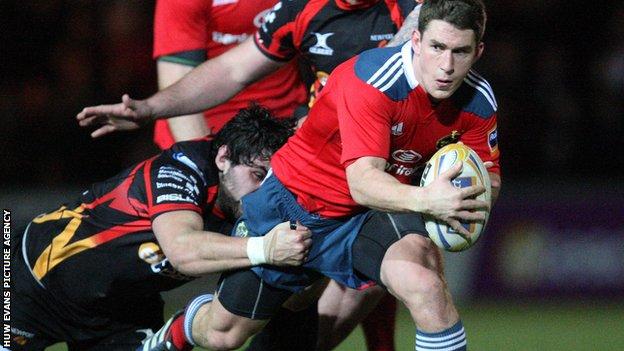 Ian Keatley's six penalties saw Munster maintain their position at the top of the Pro12 with victory over Newport Gwent Dragons.

The home side were leading 6-3 at the interval through two Jason Tovey penalties.

Matthew Pewtner extended their lead with a try but three Keatley penalties edged Munster ahead.

Victory at Rodney Parade was Munster eighth league win of the season.

Lyn Jones' side were looking to claim another Pro12 scalp following their impressive win away to Glasgow a week earlier.

In a tight opening Tovey got the first points on the board with a penalty after 11 minutes but missed another from the right touchline soon after.

O'Connell was a tower in the Munster thrusts into the home 22 and, from one of those attacks, the visitors were awarded a penalty directly in front of the posts which Keatley slotted easily.

Tovey stepped up to hoist the ball straight through the uprights and send his side into the break 6-3 ahead.

Tovey had another long-range penalty attempt that missed and that could have made some difference in the final outcome as fly-half Keatley began to lead the fightback,

Munster had centre Keith Earls sent to the sin-bin for a high tackle on home centre Pat Leach midway through the half.

Another error near the Dragons' posts saw Keatley pop over his third penalty and he put Munster into a one-point lead on 67 minutes.

Tovey's drop-goal restored the home lead but two more Keatley penalties towards the end and the sin-binning of home lock Cory Hill finished the Dragons off.