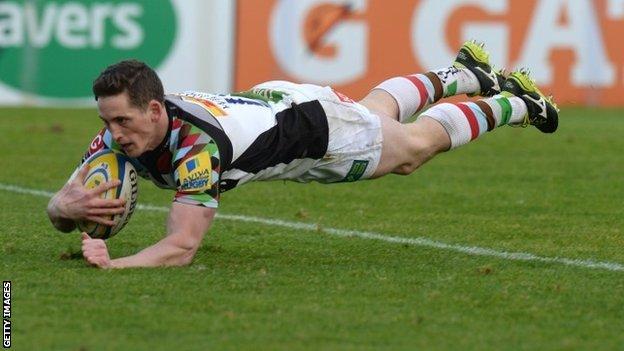 Dean Richards' first game against former club Harlequins since the 2009 'Bloodgate' affair that cost him his job ended in defeat as his Newcastle side were outclassed at Kingston Park.

Tom Williams, the player at the centre of the scandal, returned to haunt Richards, finishing a fine Quins move.

The result moved Quins into the top four.

Richards was banned from coaching for three years as punishment for his involvement in Bloodgate, when he was found to have orchestrated a plan for Williams to use a fake blood capsule as a way of getting goalkicker Nick Evans back on to the pitch in Harlequins' Heineken Cup semi-final against Leinster in 2009.

The former England number eight had been keen to play down the significance of the match but when Williams crossed for a try after just nine minutes, the coincidence was hard to overlook.

The winger dived over - the video official ruling there had been no forward pass in the build-up - and Evans added to the storyline by knocking over the conversion.

Godman kicked the first of his three penalties to reduce Quins' lead, before Evans kicked two of his own as his side kept the Falcons at arm's length.

Another Godman kick on 32 minutes gave Falcons renewed hope going in to the second half but the home side made the worst possible start after the break, with Smith finishing off a five-on-one overlap to touch down in the corner after a sweeping backline move.

A final Godman penalty brought the score back to 18-9, but Quins' superiority was clear with Care dummying his way over after a sustained period of pressure.

And the bonus point was duly wrapped up with 13 minutes to go as a lack of precision in attack by Newcastle was punished when Smith sprinted from his own 22m line to score at the other end.

The Falcons have - by a distance - the worst tryscoring record in the Premiership, having crossed just three times all season, and they showed little sign of adding to their total. A burst by full-back Alex Tait that ended just short of the line was as close as they got.

"We started slowly, but got into it and the score just after half-time took the crowd out of it and deflated them.

"We're more than happy with the win, but what excites me there is so much more within this group.

"I'm delighted for the lads I worked with at Quins, but there has been lot more work done there since I left. They have been together seven or eight years and there was a lot of quality youngsters there put in front of me and Conor has carried that on.

"As far as we're concerned we were competitive last week, but we missed a of opportunities today and we didn't perform. I don't know why.

"We didn't take our foot of the gas in training, but we couldn't adapt to their skill and a lot of our players are very disappointed.

"We need to just go out there and play and not be too worried about the outcome."