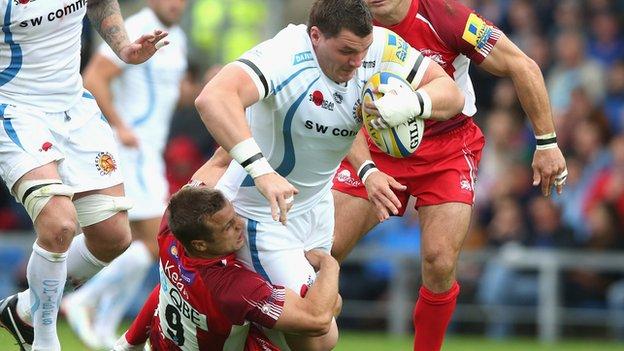 The 26-year-old, who can play in the back or second row, has struggled with injuries during the last two seasons.

Phillips has made just two appearances for the Chiefs this term, both coming in the LV= Cup.

"We feel it's good he plays some regular rugby and gets himself in position to compete for a place here," said Chiefs head coach Rob Baxter.

"James had a broken season last year because of injury, but now that he's up and running again it's important he keeps himself fully fit and playing rugby.

"Obviously an opportunity at the Pirates has come about because of a few injuries they've had in recent weeks."

Phillips, who joined the Chiefs from Bristol in 2010, has played 44 games for the club and scored six tries.

Pirates coach Ian Davies added: "This opportunity ticks so many boxes. It gives James some game-time and for us it gives us a Premiership-quality number eight to bolster an area decimated by injuries.

"It also means the younger back-row players in the squad can benefit by learning from James. Although he is with us for a short period he is well-known to quite a few of our players, so I'm sure he'll fit right in."