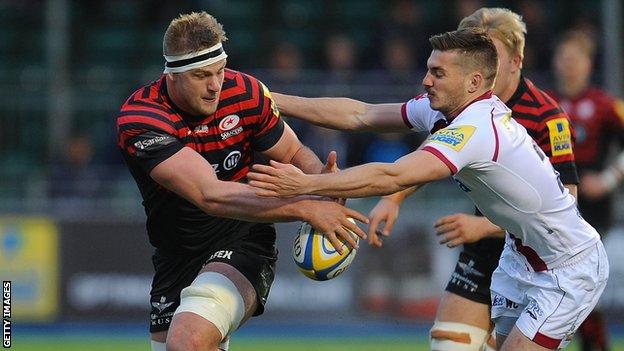 A late comeback from Premiership leaders Saracens saw them overcome a dogged Sale side to stay top.

A converted try and drop-goal from Danny Cipriani helped the visitors to a 13-6 lead at the break.

But second-half tries from debutant Jack Wilson and forward George Kruis meant the Sharks were denied after a determined defensive performance.

Hodgson put Saracens ahead in the first minute with a penalty, but Sale took the lead 10 minutes later.

Winger Charlie Ingall chased down his own kick and, after putting pressure on the Sarries defence, picked up a loose ball in the 22 and off-loaded to Cipriani, who touched down under the posts.

The try was given following a referral to the Television Match Official and Cipriani converted for a 7-3 lead.

Sale held firm under pressure, but Hodgson brought Saracens back to within a point with a penalty five minutes before the break.

Sharks full-back Rob Miller restored their four-point advantage almost immediately with a penalty from five metres inside his own half and a drop-goal from fly-half Cipriani meant the visitors enjoyed a six-point lead at half-time.

Saracens came back into the game shortly after the break when a driving maul took them to within two metres of the line and winger Wilson crossed in the right-hand corner on his Premiership debut.

Hogdson missed the chance to level the scores with his conversion and Cipriani then made it 16-11 when Saracens gave away a penalty in front of the posts.

Ingall thought he had given Sale a 10-point lead after crossing in the corner, but referee JP Doyle went to the TMO and the try was ruled out for a knock-on in the build-up.

Sarries then moved within two points after another Hodgson penalty and the Londoners took the lead eight minutes from time when Kruis peeled off a ruck and touched down in the corner following an intense period of pressure inside the Sale 10 metre line.

Hogdson converted from a narrow angle and added a penalty but a late kick from replacement Macleod reduced the margin to five points, enabling Sale to pick up a losing bonus point.

Saracens remain top of the table but they will have concerns for open-side flanker Will Fraser, who was taken off on a stretcher after half an hour with a serious ankle injury.

"Give Sale a lot of credit. They made us work very hard for it.

"We weren't at our best in the first half and we gave them some points. We had much more energy and dominated the second half but they made us battle for everything we've got."

On Will Fraser's injury: "It's not looking good.

"He'll be a huge loss. He played magnificently for the club last year, he had an operation at the end of last season and was just coming back to his best."

"We got the game plan right. We just couldn't execute the exit a couple of times getting out of our 22. If we'd done that we'd have won the game.

"There's no point whingeing about it. We got a bonus point and we've got six points out of our last two games which is good for us.

"If somebody had said that two weeks ago we'd have been happy with it. I think Saracens know they've been in a game.

"It was a good performance and it would have been great to get the scalp but it wasn't to be."