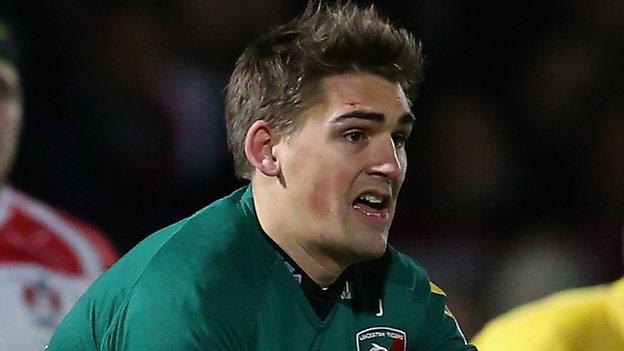 Toby Flood kicked Leicester to victory at Kingsholm as the Tigers twice came from behind to condemn Gloucester to a fifth successive Premiership defeat.

After Freddie Burns raced clear for an early converted try, Flood replied with two penalties before the England stand-off dummied and offloaded to send in centre Dan Bowden under the posts.

But three more Flood penalties won it for the reigning Premiership champions.

But, to rub salt in home wounds after four missed Gloucester penalties, three successful three-pointers in the final quarter-of-an-hour rescued Leicester, as Flood, who had also converted Bowden's first-half try, took his haul for the night to 17 points.

Flood's own missed penalty in the final minute then suddenly gave the Cherry and Whites an unlikely attacking platform.

But a handling error in their 10th phase finally sealed Gloucester's seventh defeat in nine Premiership games this season - four of which have now come on home soil at Kingsholm.

Leicester's failure to gather the kick-off provided the momentum for the hosts to have the better of the opening 10 minutes.

They should have taken the lead, only for Burns to miss the first of his two penalty attempts.

Almost immediately, the Gloucester stand-off made amends when he intercepted Flood's pass to race 50 metres under the posts for the opening try, which he duly converted himself.

Leicester soon responded with their first points when Flood kicked a penalty after the home side were penalised for a scrummaging offence. And, when Gloucester were then penalised at a line-out, it allowed Flood to reduce the arrears to only point.

After Flood missed his next penalty chance, Leicester were rewarded when England scrum-half Ben Youngs robbed opposite number Dan Robson, setting up the platform from which the jinking Flood cleverly slipped Bowden in for the Tigers' only try.

Flood converted for a 13-7 lead but, with the last play of the half, and Leicester in a great position to extend their lead, they were stunned when winger Miles Benjamin's pass was intercepted, Henry Trinder's left boot thumped the ball into the unguarded Tigers half - and the ball sat up perfectly for the galloping May, who barely broke stride as he collected before running on to score.

Having gone in 14-13 up, Cook missed an early penalty before Gloucester suffered another blow when captain Tom Savage was forced to leave the field with a shoulder injury.

Cook then failed again, resulting in the choice of Twelvetrees to step up to the plate as his side's third kicker of the night and he made no mistake with his first opportunity.

Flood then narrowed the gap to a point as Leicester staged a late rally, before adding two more penalties to earn his side their fourth league win of the season.

"I was bitterly disappointed to lose like that. You have to have parity in the set scrum and take the points when they become available.

"There are a lot of boys in the changing room very upset about their performance.

"We played with plenty of spirit but we are not accurate or clinical enough. Things have to change.

"We measure the boys and they are tested in training every week. Freddie Burns was the most accurate with Rob Cook second but obviously it didn't work out on the night."

"We needed the points. It was a very important game. It could have gone either way but any win on the road is a good one.

"For 25 minutes in the second half we had no ball and, at the end, we were hanging on by our finger nails.

"All credit to the boys for hanging on in there but 14 of their points were obtained cheaply.

"We've got to improve but we can beat anyone on our day and hopefully we may have a few of our injured players back."