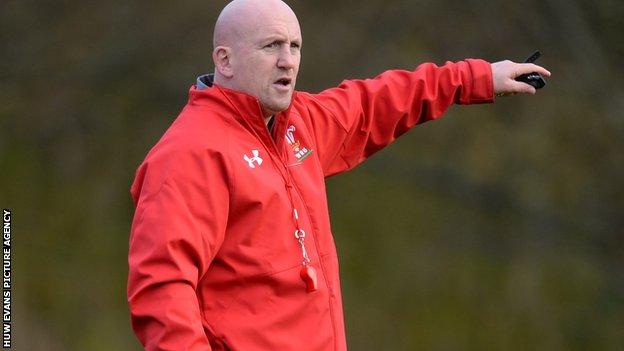 Defence coach Shaun Edwards wants a Wales victory over Australia on Saturday to put down a marker ahead of the 2015 World Cup.

Wales and the Wallabies are due to meet in less than two years in a pool match at Twickenham.

Edwards thinks a victory this weekend would give Wales a psychological boost.

"We have got to get that confidence going into the Rugby World Cup but obviously getting one up on them would be great," he said.

But to get that victory Edwards says Wales, who were due to announce their team on Tuesday lunchtime, will have to focus for the whole game to avoid any more last-minute defeats against the Wallabies

Wales have not beaten Australia since 2008, losing eight games in a row, with half of those defeats by three points or fewer.

The Welsh have allowed the Aussies to clinch a win in the dying moments of the last three games between the sides.

"We have to play for 80 minutes, we cannot switch off," said Edwards.

"Tactically we have to be absolutely perfect, physically we are in better condition than we were this time last year.

"The conditioning staff have done a really good job with all our players and we are peaking now.

"But it's no good me talking about it, we have to show it on Saturday.

"Because of the quality of the opponent we are playing against... any crack and they will exploit it."

Wales lost the last game 14-12, when Kurtley Beale scored a try with the last move of the match, at the Millennium Stadium in December 2012.

And previous to that, Wales were beaten by two penalty kicks in the final minutes of the Tests in Melbourne and Sydney on their 2012 summer tour.

Since then, a British and Irish Lions side, dominated by Welshmen, clinched a 2-1 Test series victory over the Wallabies in 2013.

Edwards admits Australia have been the better side over recent times but believes Wales are a much improved side because of those close calls.

"Australia probably have the edge on us recently, with very close scorelines," Edwards said.

This is the game everyone has been waiting for. Let's make no bones about it

"I think we have improved a lot since 2009 when they gave us a right walloping at the Millennium Stadium.

"We have progressively got closer to them and both teams will be totally motivated for the game at the weekend.

Captain Sam Warburton stated earlier this month that he expected Wales to win three out of their four Test matches this autumn.

Wales have won their last two autumn internationals, with wins against Argentina and Tonga, after the disappointment of the 24-15 defeat to South Africa.

"We want to win every game," said Edwards. "But we set our stall out and Sam has said our goal is to get three [wins] out of four [games].

"Lets be honest, I think, this is the game everyone has been waiting for. Let's make no bones about it.

"South Africa was a massive game against a world class opponent, I thought we did exceedingly well in that game.

"It is well documented how close that game was... but everybody knows how Wales versus Australia have been brilliant games recently.

"They have been so close and so competitive and a high standard of rugby.

"In the back of everybody's mind has been the build up to this game."