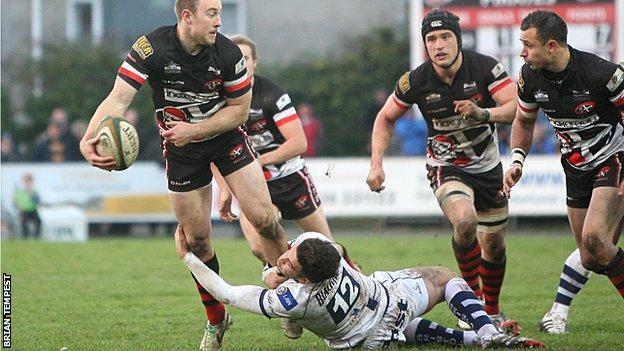 Bristol's squad featured former Wales star Nicky Robinson and several ex-Premiership players, but they have now lost twice to the Pirates this year.

"There's lots of experience if you look at their squad and what they've done," Davies told BBC Radio Cornwall

"We've got a lot of young players and for them this is probably the biggest home game they've played in."

Davies, who has tipped Bristol to win the Championship, said: "There was a massive crowd and atmosphere and they had to concentrate for the full 87 minutes in the end.

"Last week we switched off against Jersey and we couldn't afford to do that this week. We really saw it out.

"We performed to a man against Bristol again - and you have to, they're a cracking team. You saw from the first whistle that Bristol came with a lot of intent to play and it was cracking game of rugby."

The Pirates threw away a winning position in the final moments against struggling Jersey last week, and Davies said his youthful side had given a superb response.

"Now we have to back it up against Nottingham and try to stay at the top of the rollercoaster and not come crashing back down - but we should also bask in the glory of a really good win."