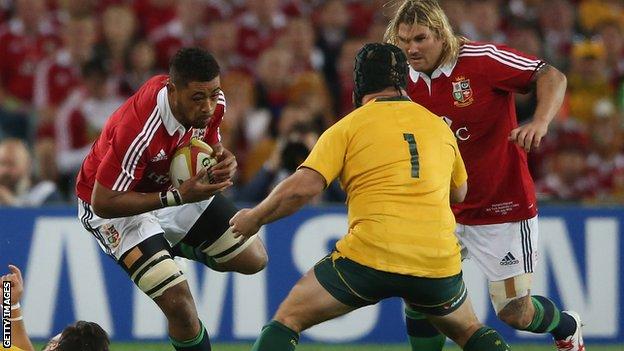 Australia coach Ewan McKenzie insists the British and Irish Lions series win will not be a factor when the Wallabies take on Wales on Saturday.

The Lions beat Australia 2-1 in the summer with a side packed full of Welshmen and coached by Warren Gatland.

But former Wallaby prop McKenzie says Wales are different to the Lions.

"You can get confidence about that [the Lions] but it's a different environment - it's a whole different context," he said.

We have got a good track record against them. Our guys have got a lot of experience about winning against Wales

"Warren was involved in that but the assistant coaches were different. So I don't think you can make that comparison."

In the final Test in Sydney in July the Lions sealed the series with a side containing 10 Welshmen.

Seven of those are set to face Australia on Saturday as well as tour captain Sam Warburton and possibly two other Lions tourists Justin Tipuric and Alex Cuthbert.

McKenzie reckons that Wales possibly think they have the edge over the Wallabies, who have lost to England but have since had wins over Ireland and Scotland.

"Warren's got Wales pretty well firm favourites for this one. So he's not worried about us," he claimed.

"They think they are [favourites] but we will be going there to win.

"We have got a good track record against them. Our guys have got a lot of experience about winning against Wales."

Wales, who are up to fifth place in the IRB world rankings ahead of France, have had some close, but losing encounters with the Wallabies in recent times.

"The breakdown area has been a really important part of those contests every time and I think Australia has probably handled that slightly better," said McKenzie.

"But what I have seen of Wales of late they have improved. There's a lot better application and detail. They have got a pretty complete game.

"These guys are Six Nations champions so it's a good scalp for us to chase.

"We have been ticking away. I think we have made a lot of progress.

"We have held the last two teams [Ireland and Scotland] to no tries so that tells me defence is starting to improve.

"We are quite pleased with our focus and momentum."