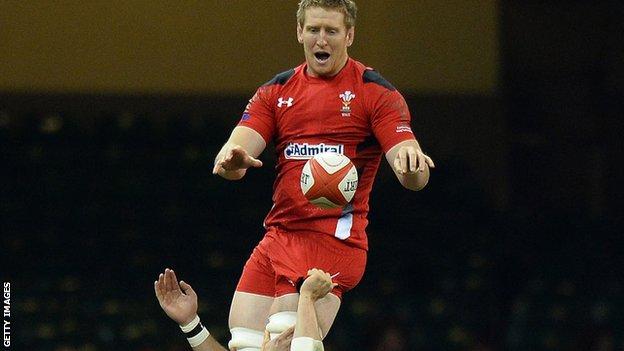 However, BBC Wales Sport understands the player, whose contract runs out at the end of this season, has not yet committed himself to the Welsh region.

Davies is being linked with a move to London Wasps, which his former Blues team-mate Martyn Williams says would be bad news for Wales.

"It would be a blow if they lose a player of Bradley's quality," he said.

"But you know if he's away on international duty for half a year I suppose they'll just bring somebody in who's going to be available for the full 12 months so they'll just have to try and cover his absence next year."

Davies captained Wales on their tour of Japan in the summer of 2013, and started the autumn international matches against South Africa and Argentina.

However, he required surgery on an injured shoulder following the 40-6 win over the Pumas and is likely to miss the start of the 2014 Six Nations.

If Davies, 26, were to move to Wasps - coached by his former Blues boss Dai Young - he would be the second high-profile Wales international this autumn to opt to play their domestic rugby outside their home nation.

Scarlets centre Jonathan Davies will join Clermont Auvergne at the end of the season, adding to a list of internationals who have turned their back on the Welsh regions.

The Blues also have Wales and Lions captain Sam Warburton out of contract next year as well as IRB world player of the year nominee Leigh Halfpenny.

And there are concerns surrounding the futures of Ospreys forwards Ian Evans, Adam Jones and Alun Wyn Jones whose domestic contracts also expire in the summer of 2014, although tight-head Adam Jones has said he feels he is too old to play in France.