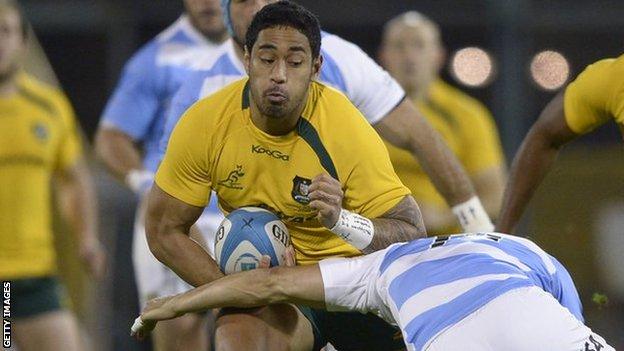 Australia have only made four changes to their starting line-up to face Scotland despite one-match bans for six players after a drinking session.

Tevita Kuridrani also received a five-week IRB ban for an illegal tackle and fellow centre Matt Toomua was ruled out because of a hamstring injury.

Their places are taken by Mike Harris and Christian Leali'ifano for Saturday's match at Murrayfield.

There is also a new wing pairing of Joe Tomane and Chris Feauai-Sautia.

The rest of coach Ewen McKenzie's eight changes following Saturday's 32-15 win over Ireland in Dublin are on the bench.

Wingers Adam Ashley-Cooper and Nick Cummins had been two of the six suspended for the "inappropriate levels of alcohol" in breaching team protocol.

It means that Leali'ifano and Tomane will receive their first outings in the starting team since they suffered injuries in Australia's 54-17 victory over Argentina during the Rugby Championship in October.

Feauai-Sautia also made his Test debut during that tournament against South Africa and will now receive his second cap for the Wallabies, while Harris, who has eight caps for Australia, wins his first start this year.

Front-rowers Tatafu Polota-Nau and Benn Robinson have lost their place on the bench, with Saia Fainga'a and Ben Alexander taking over, while open-side flanker Liam Gill is replaced with Ben McCalman.

Versatile backs Nick Phipps and Bernard Foley are the other additions to the bench for the Hopetoun Cup match.

Waratahs prop Paddy Ryan is the only one of the six sanctioned players named in Saturday's squad, with McKenzie forced to put him on the bench because of a lack of front row numbers in his tour party.

Ryan will serve his one-match ban in the Test against Wales in Cardiff next week.

Despite the forced changes, McKenzie remained confident of a win over the Scots, who are looking to recover from Sunday's 28-0 battering by South Africa.

"We've made some difficult selection decisions this week and now I'll be looking to see how those individuals with an opportunity respond to the challenge," said Australia's coach.

"All Spring Tour, I've been impressed by the competition we've been able to create in a number of positions.

"Now, some of those guys get a chance to impress in new roles this week.

"Christian hasn't had a great deal of experience at outside centre, but he is a class player and we're confident he can adjust to the position.

"We'll be asking him to bring the things he does well to the game and nothing more.

"At the other end, we have the luxury of naming an unchanged forward pack from last week's win.

"I was really impressed by how they stood up against a stout Ireland pack and now it's their job to replicate and improve on that effort against Scotland."

McKenzie, who took over from Robbie Deans after the home series defeat by the British and Irish Lions in July, has led his side to steady improvement since a tough opening against southern hemisphere opposition in the Rugby Championship.

A narrow 20-13 defeat by England was followed by a 50-20 win over Italy in Rome, before the Wallabies enjoyed their four-try success in Dublin.

Scotland are aiming for three straight wins over the Wallabies following a 9-8 home victory four years ago and a surprise 9-6 success last year in Newcastle.

"Our main focus right now is to get our own backyard in order and start building momentum by winning consecutive games," added McKenzie.

"We took a step forward last week by scoring our first back-to-back win of the year, but now it's about getting three in a row.

"However, Scotland is also a team that has gotten the better of Australia in the recent past and has won the past two games. This is an important match for the group to get right."