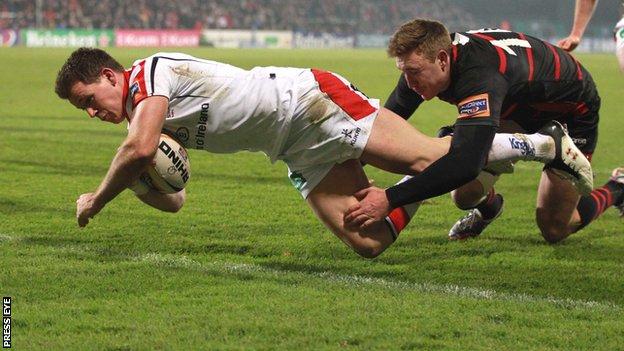 James McKinney chalked up 21 points as Ulster cruised to a bonus-point Pro12 win over Edinburgh at Ravenhill.

Cornell du Preez's try put the Scots ahead but Ulster took control and tries from Craig Gilroy and Paul Marshall saw the hosts lead 20-5 at half-time.

Robbie Diack and Gilroy went over to extend Ulster's lead before McKinney, who fired over all seven kicks on goal, capped a fine performance with a try.

Edinburgh coach Alan Solomons was making his first return to Ravenhill since leaving Ulster in 2004 and his side made the brighter start.

The opening try on 15 minutes came from an Edinburgh scrum, with du Preez barging down the line and Mark Allen's tackle was not enough to prevent the number eight stretching out over the line.

Harry Leonard missed the conversion before Ulster shook off the rustiness from the three-week international break to seize control.

McKinney slotted over a penalty and Gilroy put the hosts ahead after 28 minutes when Darren Cave's looping pass gave the wing space to twist over.

McKinney added the extras and the fly-half also converted Ulster's second try five minutes later, with Marshall touching down after kicking the ball forward from Cave's break and lay-off.

The hosts finished the first half on a high when McKinney continued his impressive kicking display by firing over a penalty.

Edinburgh pressed on the restart but a combination of firm Ulster defence and a series of infringements meant they failed to capitalise.

Hopes of a comeback were dashed in six minutes midway through the second half, starting with Izak van der Westhuizen being sin-binned for deliberately dragging down a maul.

From the resulting penalty Paul Marshall slipped in Diack, who was skippering Ulster for the first time, and he charged over from close range.

It was quickly followed by Ulster's fourth and bonus-point try, an alert Gilroy intercepting a pass and sprinting clear to the line before McKinney crashed over in the corner from Mike McComish's lay-off.

McKinney converted all three tries before the Scots scored two late consolation tries as Ulster eased off with the points secure.

Fife sprinted in at the corner before replacement Grayson Hart slid in for a try, with Leonard converting at the third attempt.

Ulster will be delighted with the victory but it came at a cost with Iain Henderson, Allen and Lewis Stevenson all forced off with injuries.