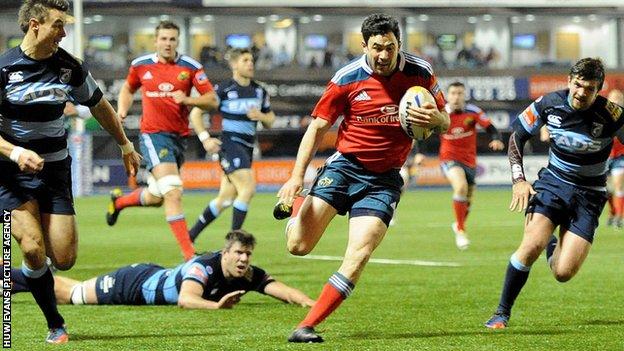 Munster moved back to the top of the Pro12 with a comprehensive demolition of Cardiff Blues at the Arms Park.

The Irish province were briefly deposed at the top after Ospreys beat Zebre.

But with the bonus point in the bag two minutes into the second half, Munster stormed back to the top.

Fly-half Simon Humbertsone gave the Blues the lead in the 13th minute, but wasn't called upon again until he converted Dacey's try after 50 minutes, but by then Munster had crossed four times.

The home team's promising start gave no hint of what was to come, but once Munster's pack had taken control the Blues had no answer.

Once their forward platform was established, the Irish team ruthlessly capitalised on any defensive weaknesses, with former Blues centre Casey Laulala their chief tormentor.

The New Zealander took full advantage of a slip by Gavin Hewitt to send full-back Jones sprinting in from 20 metres for the first Munster try after 16 minutes.

And he was heavily involved in the fourth Munster try when a delightful pass out of the back of his right hand allowed Jones to scamper through again, although this time the full-back handed on to wing Conway who touched down in the corner.

That try came in the 42nd minute of a match which was already over as a contest at half time.

By contrast Munster's second and third tries were a direct result of their forward dominance with hooker Varley bursting through the middle of a ruck and then prop Cronin charging over unopposed as Munster took advantage of Humbertone's charged-down kick.

With the bonus point secured Munster took their foot off the gas, and were further hampered by yellow cards issued to C J Stander and Mike Sherry as the Blues pressed forward.

However, their lead was never threatened and Blues director of rugby Phil Davies was left frustrated at his team's defensive lapses.