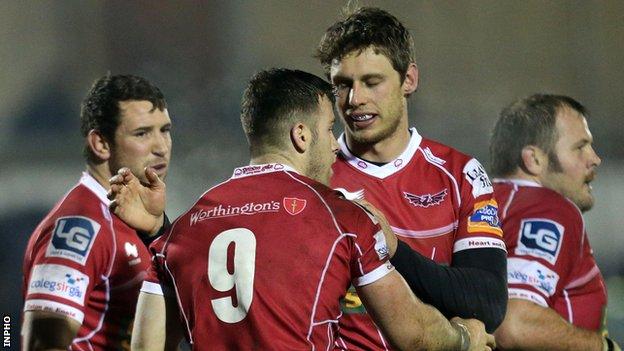 The Scarlets held off a late fight back by Connacht to edge victory in the Pro12 clash in Galway.

The Scarlets then looked in control as touchdowns from Kirby Myhill and Gareth Davies extended their lead to 24-9.

But tries from Matt Healy and Jason Harris-Wright left the Welsh club hanging on in the closing stages.

As Connacht produced late pressure, the Scarlets had Gareth Owen sent to the sin bin before time ran out for the Irish province, who remain bottom of the table after their seventh defeat of this season's opening eight games.

Fly-half Ronaldson, making a rare start in place on Dan Parks, kicked Connacht into a 6-0 lead by the 10th minute as the home side started in energetic fashion.

Aled Thomas opened the Scarlets's account in the 24th minute but Connacht responded by producing intense pressure which led to Jacobie Adriaanse receiving a yellow card.

However crucially, the period of Connacht superiority only yielded three more points from the boot of Ronaldson and the Scarlets then took an unlikely 10-9 lead before the break as Climo's try was converted by Thomas.

Ronaldson missed a chance to put Connacht ahead again three minutes after the restart and the Irish side were in trouble four minutes as hooker Myhill ran in a try which was again converted by Thomas.

Pat Lam's side looked to have collapsed five minutes later when scrum-half Davies dived over the line to score the third Scarlets try, with Thomas again adding the extras.

But on 56 minutes Connacht got themselves back into the match as Healy intercepted the ball and ran the length of the field to score with Ronaldson adding the extras before being replaced by Parks.

Scarlets then found themselves down to 14 men as flanker Aaron Shingler was shown a yellow card for tackling off the ball on 65 minutes.

And Connacht made immediate use of their man advantage as brilliant work from their pack saw Harris-Wright score.

Parks conversion however flew to the left of the posts and Connacht remained three points behind with 12 minutes left.

But while Connacht's late pressure led to the sin-binning of full-back Owen, the Scarlets completed together back-to-back wins over Irish sides following their 2 November win over Ulster.