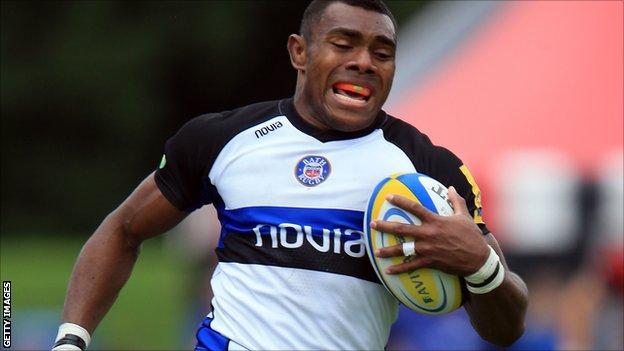 Bath moved up to third in the Premiership with a comprehensive three-try victory over London Wasps.

The visitors led 11-0 at the break with a penalty and drop-goal from George Ford and Semesa Rokoduguni's try.

Rokoduguni added a second after half-time, which Ford converted before also sending over a penalty.

Jonah Holmes went over in the corner for Wasps' only points but a late Matt Garvey try and Tom Heathcote's conversion sealed the rout for Bath.

The away side held a healthy advantage at the break, Ford doing the damage early on with a penalty and snap 40-metre drop-goal while Andy Goode missed two successive kicks for the home side.

Indeed Bath were the dominant force throughout and, after Nick Abendanon was held up, Wasps were reduced to 14 men with prop Phil Swainston sin-binned five minutes before the break for deliberately bringing down a driving maul.

With a man advantage, it was no surprise when the first try came as Rokoduguni collected Jonathan Joseph's offload to score, though Ford missed the conversion.

Goode's erratic afternoon continued as he missed his third penalty of the match before Ford stretched the lead to 14-0 with another penalty.

Bath moved out of sight with Rokoduguni finishing off Leroy Houston's powerful break for his, and Bath's, second try of the afternoon, which Ford converted.

Wasps finally got on the scoreboard with a try from Holmes after they won the ball from a Bath scrum, though Joe Carlisle missed the conversion.

But Bath had the last word with flanker Garvey scoring their third try after catching Wasps cold at the front of a line-out, with Heathcote adding the extras.

"Bath really didn't have to fight too hard for it, that's the disappointing factor.

"It was pretty much an unacceptable performance. We lacked quality in everything we did today.

"Our front row came off second best and really struggled and when we had the ball we never went past four phases so we ended up defending for long periods.

"We were really flat. We lacked enthusiasm and excitement today. When we did have the ball, we didn't build any momentum or pressure. We never stretched them.

"We owe our fans an apology because we let them down."

"We played well away from home - a very clinical, professional performance.

"We're pretty disappointed we never got four tries in the end.

"They boys are maturing and the work Neal (Hatley) and Toby (Booth) have done with the forwards has been sensational this year.

"You saw today the dominance at scrum and lineout time. There's not many teams this year have got the better of us in the tight forward play.