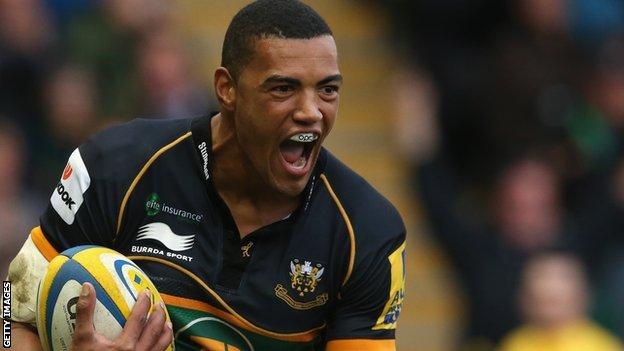 Saints had much the better of the first half, but had to rely on two Stephen Myler penalties to give them a lead at the break.

The hosts finally went over midway through the second half when Wilson touched down in the corner.

Burrell's second try secured victory, to ensure that the scoreline reflected Northampton's control of the game.

Ninth-placed Newcastle are the lowest-scoring team in the Premiership, with just three tries and 69 points from their eight matches so far.

Even Worcester, who are bottom of the table and without a win, have scored more with 95.

Although the win was richly deserved, a well-drilled Newcastle side made second-placed Saints work hard for the points.

It may have been a smoother ride had Northampton converted their first opportunity with the match just 90 seconds old, when wing Tom Collins latched onto a long kick forward, only for Ryan Shortland to get across and send his opposite number into touch just short of the line.

Saints turned down numerous penalty opportunities to head for the corner instead, but a tireless and resolute Falcons defence held out until the half-hour mark, when Myler finally elected to go for the posts after Carlo del Fava was sin-binned for infringing at the ruck.

Myler kicked a second routine penalty soon after, but Northampton failed to make their numerical advantage count further before the break.

In a scrappy encounter, it took Northampton until the 58th minute to score the first try, with Wilson bursting through to go over in the corner after Jamie Elliott fielded an up-and-under from Mike Blair, but Myler missed the conversion.

Northampton extended their advantage soon after when the ball broke loose following a Falcons scrum and Burrell produced a crunching challenge on Danny Barnes, brilliantly stealing the ball in the process to touch down.

The TV match official took some time to confirm the ball had been grounded, but the try was allowed to stand and this time Myler added the extra points.

The visitors battled to the end, but were unable to find a way onto the scoreboard, and the result kept Saints hot on the heels of leaders Saracens and seven points clear of Harlequins in third.

"We knew it was going to be hard work breaking down Newcastle.

"They have got a big, heavy pack, they defend very well and we weren't quite as fluent in attack as we would like to be.

"We need to look at Ben Foden. He was struggling to walk off. Fingers-crossed there is nothing wrong there."

"We got absolutely nothing from the referee or the touch judges.

"When you look at it in slow motion you can't understand where they are coming from with the decisions they make.

"All you want is a bit of parity in the decision making and we didn't get that from the officials. The scrum was a lottery.

"When you have people riding up on the outside of the scrum, the loose-head coming in at an angle at every scrum, you can't understand how they get to the conclusion they do."