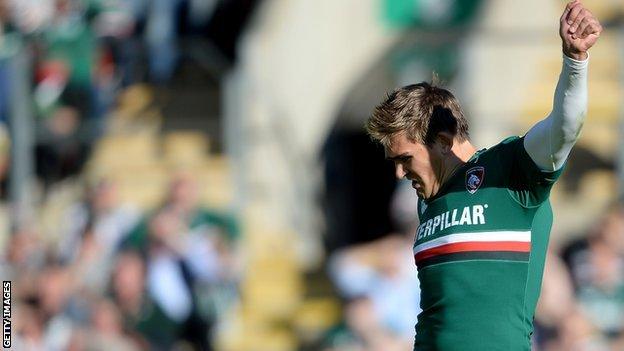 Toby Flood converted two penalty tries to help a disjointed Leicester to their first Premiership win since September against a plucky London Irish side.

The Tigers captain booted his 1,003rd Premiership point when he converted to make it 20-6 against the 14-man Exiles.

Fergus Mulchrone ran in a late Irish try, but Myles Dorrian failed to convert to earn a losing bonus point.

Tigers were searching for their first win in four premiership games dating back to September 29, after losses to Harlequins, London Wasps and a draw with Northampton. And, while it was London Irish that crashed to their fifth successive loss in all competitions at Welford Road, they showed up the defending English champions for long periods with their attacking endeavour.

Fly-half Flood missed a fourth-minute penalty from 40 metres and then turned down four chances for a kick at goal before a penalty try was eventually awarded on 10 minutes for a collapsed scrum near the line.

But that was before Australia international O'Connor and England's Marland Yarde, playing their first game together, struck up an encouraging partnership.

Winger Yarde had Tigers backpedalling at pace, stealing the ball and bursting away before Flood intervened with a decisive ankle-tap.

Eamonn Sheridan then squandered a chance for the visitors, ignoring Topsy Ojo on his outside with the line begging.

O'Connor eventually booted the Exiles' first points with a penalty on 22 minutes, before following up his first points in English rugby with another penalty after the half-hour to reduce the deficit to a single point.

Flood made it 10-6 with his first penalty before Irish suffered a blow just before half-time, losing hooker David Paice with a suspected broken right arm.

Leicester were struck by injury woe of their own when Matt Smith, making his first league start of the season, was forced off.

Flood booted the hosts seven points ahead with the first attacking penalty of the second half before Niall Morris thought he had done enough to go over for a try after charging down and collecting an O'Connor kick.

While it looked as if the winger had crossed the line under the momentum of Yarde's tackle, the TV match official disagreed. Yarde was injured in the process and had to go off.

The game ground to a standstill of 11 successive scrums set close to the Exiles line, which saw London Irish prop John Yapp yellow carded in the process.

Referee Martin Fox eventually ran out of patience and awarded a second penalty try for Tigers, and Flood added the extras to extend the lead to 14.

London Irish would not relent, however, and got a deserved late try on the counter with Mulchrone touching down. Dorrian failed to snatch a losing bonus point, grazing the post with his kick.

"The first penalty try seemed to be very quick and it looks like someone had a few words with the referee at half-time and said.

"And the second one was ridiculously long. We can't get any consistency within a game, never mind from game to game.

"We dominated the scrum and if you don't want to stay square and walk round all the time, what is the referee meant to do?

"You have to win your home games and keep chipping away. We needed the four points, but we could not get any shape into our game."

"You know what you are going to get here. Leicester tried to put us under pressure by continually scrumming us.

"It's difficult. There were a series of scrums and the crowd were as impatient as the coaches. It was difficult to see a great deal of consistency, but I take nothing away from Leicester. They had the intent and wanted to scrum us into the ground and got rewarded.

"We had two opportunities to squeeze a bonus point out of it, one off the tee and a drop-goal, and we came up short - but that's footy. We gave it our best shot.

"I am really proud of the effort from our boys. I thought [captain] George Skivington did a great job leading the troops into battle, and we gave it everything."