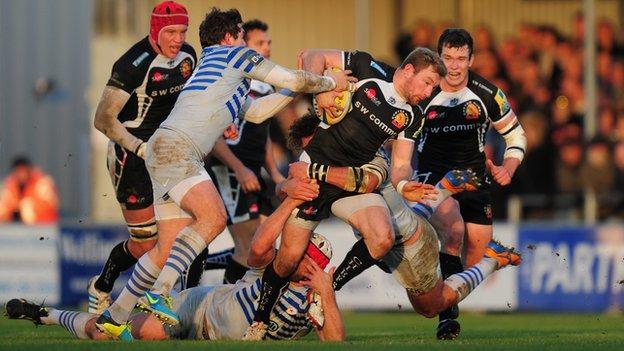 Saracens stayed top of the Premiership as they saw off Exeter's second-half onslaught for a hard-fought victory.

But the Chiefs countered with three penalties of their own, Gareth Steenson landing two after the break to add to Phil Dollman's first-half effort.

And they were twice denied tries by TV match official verdicts.

Ian Whitten was the first to be denied at Sandy Park before England flanker Tom Johnson thought he too had scored in a nail-biting finale, only for the video verdict from David Sainsbury to suggest that he too had grounded the ball just short of the line.

Charlie Hodgson's early exit came on top of the loss of England centre Joel Tomkins, who missed the trip to Devon with a knee injury picked up while on international duty which looks likely to sideline him for three months.

But Hodgson and fellow fly-half Owen Farrell, rested following his international exertions with England, are both expected to fit for next weekend's home game against Sale.

A converted try would have snatched a draw but instead Exeter had to settle for a losing bonus point as, coupled with second-placed Northampton's win over Newcastle, the Chiefs missed the chance to make up ground on the top two.

Ransom had only been on the pitch two minutes when he scored, applying the finish after a surging run from England winger Chris Ashton, after coming on as a replacement for former England stand-off Charlie Hodgson, who suffered a blow to the head.

But the Chiefs rallied well and came within a whisker of claiming a swift response when, after a slick handling move, Jack Nowell fed Whitten, who, despite taking the ball at pace, was adjudged to have been taken short.

With 10 points to make up at the break after losing the first-half penalty exchange two to one, the Chiefs needed a strong start to the second period - and they got it when Steenson landed an early penalty after the visitors were pulled up for not releasing.

But Sarries countered through Argentinian centre Bosch, whose penalty from just inside his own half crept over via the crossbar.

Steenson and Bosch both missed penalty chances before the Chiefs' efforts were finally rewarded 10 minutes from time when Steenson landed a third penalty.

The Chiefs now had the bit between their teeth and, when Nowell created havoc with a superb kick, the home side worked the ball through countless phases to Johnson, who appeared to crash over for a crucial score. But again referee Tim Wigglesworth went upstairs for the spot check - and again the TMO ruled against Exeter.

"We put a lot into the game and, if you look at the overall game, a draw would have been a fair result, but it wasn't to be.

"We came up a little bit short with the two TMO decisions we had. If one of those had been given, that might have changed the game. But we have got to take them on the chin.

"Overall, we attacked the game and went after Saracens. They are probably the best defensive side in the league and we created opportunities against them, but we made a couple of errors that cost us."

"Owen Farrell is resting after three busy weeks with England. He has played a lot for us, with Charlie Hodgson not being around for the first six weeks, but he will be back for next week.

"Charlie is fine. He got a knock on the head, and you have to be careful these days. You don't want to take any risks.

"Who is to say Exeter didn't deserve something out of the match?

"They threw everything at us, but we were able to hold on. I am really pleased that we showed such a lot of resilience."