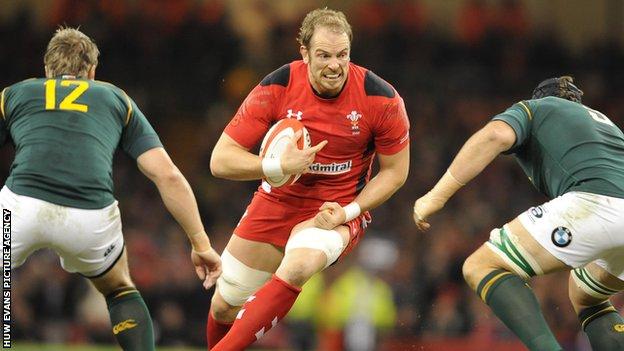 Alun Wyn Jones says Wales must be ready for another hard physical examination against Argentina on Saturday.

"Argentina will try and play in a similar vein, driving line-out and scrum," said Jones.

"It's not like for like, but up front it is going to be as close to playing South Africa."

Jones, who captained the British and Irish Lions in the third Test win over Australia in the summer, warned that Argentina - who face South Africa, New Zealand and the Wallabies regularly in the Rugby Championship - have plenty of experience in their side.

"They have a lot of strong individuals who will try to stamp their authority on the game," he added.

Argentina will be looking to repeat their victory over Wales, when during their last European tour in 2012.

Jones, 28, who has won 71 Wales caps and six Lions Test caps, is part of a new-look Wales pack selected to face the Pumas.

Scarlets rookie Rhodri Jones replaces the injured Adam Jones at tight-head prop, with Ospreys flanker Justin Tipuric in for the injured Dan Lydiate in the back row.

Wales clawed themselves back into the contest at 15-17 against the Springboks but failed to score a try, while South Africa crossed for three tries by centre Jean De Villiers, hooker Bismarck Du Plessis and scrum-half Fourie Du Preez.

Warren Gatland's side suffered a number of injuries against the Springboks, including to Lions pair Jonathan Davies and Adam Jones, who have been ruled out of at least the rest of the autumn series.

Scarlets props Rhodri Jones and Samson Lee, plus Dragons backs Hallam Amos and Tom Prydie were called in to train with the squad earlier this week as cover.

Goal-kicking wing or full-back Prydie has returned to his region for further treatment on a hamstring injury, but the other three have been retained in the squad for the remainder of the campaign.

Jones admitted the clash with the Springboks was a physical challenge for Wales but the second-row believes his side need to be more creative and accurate when they have the ball.

"If we can emulate that effort with a bit more cutting edge, we should be 90% of the way there," said Jones.

"You look at the effort we put in and the character we showed to get back to 15-17.

"If we'd had better execution with the effort, we would probably have been the right side of the scoreboard."

Jones was one of 11 Lions in the Wales starting line-up against South Africa, but then lost centre Jonathan Davies, prop Adam Jones and wing Liam Williams in the first half.

Ospreys captain Jones believes the disappointment in the Wales camp at not beating the Springboks shows the confidence and expectation in the side.

"It's a sign of how far we have come as a group of players," said Jones.

"Look at the Six Nations, the biggest win of that tournament was the one in France.

"We showed a shadow of that coming back to 15-17, but you can try too hard and then execution and accuracy diminishes."