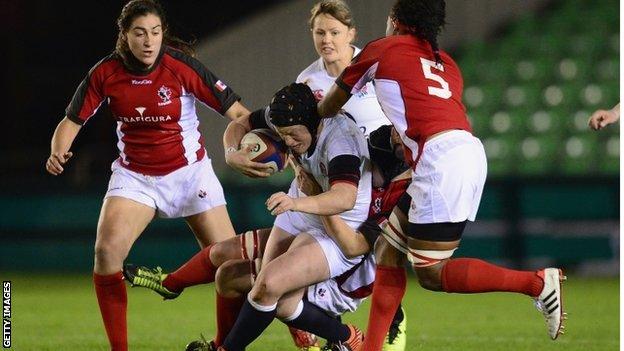 England Women followed up Saturday's victory over France with a 32-3 win against Canada at the Twickenham Stoop.

It was England's first win against their opponents in three attempts, having been beaten twice in last summer's Nations Cup.

"We've still got some players to come back so to perform like that is really pleasing," said coach Gary Street.

"We've got a tough group out in France for the World Cup but our focus before that is the Six Nations."

But Hemming scored the first try of the match after 20 minutes when a line-out was gathered by Rowena Burnfield, who set up the Bristol player for her third international try.

England extended their lead when a superb cross-field kick from McLean was safely gathered by wing Thompson who went down in the corner. A conversion and penalty from the captain made it 21-3 at the break.

The home side started the second half strongly and the power of the forwards allowed Hemming the space to cross again.

Both sides were reduced to 14 players, with first Canada's Karen Paquin and then England's Burnfield sent to the sin bin.

A fifth penalty from McLean made it 32-3 with 15 minutes to play and despite a late push from Canada, England secured a comfortable win.