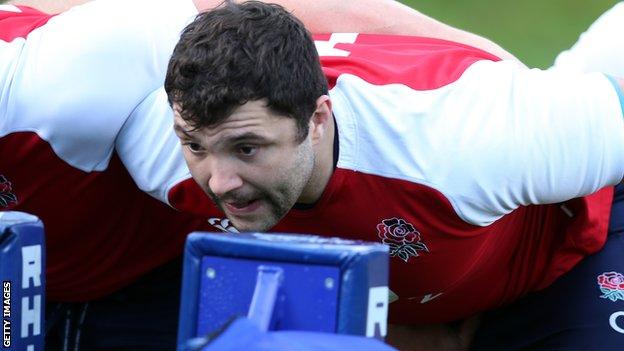 England prop Alex Corbisiero has been ruled out of Saturday's match against world champions New Zealand after a recurrence of a knee injury.

Fellow loose-head Mako Vunipola is also out through injury, as are wings Christian Wade and Marland Yarde.

Harlequins loose-head Joe Marler will have to prove he has recovered from concussion in order to play, although England say he is progressing well.

The Northampton loose-head has won 19 England caps, having made his debut against Italy in February 2011, and starred for the Lions in the decisive third Test win during the summer.

Matt Mullan, fourth choice at loose-head, has been called into the squad.

Marler, 23, was taken off at half-time in England's win over Argentina and will have to pass cognitive tests in order to play, although England doctor Phil Batty had good news for head coach Stuart Lancaster - who will name his starting XV on Thursday - on that front.

"Joe Marler has had no symptoms of concussion since Saturday, has passed all his cognitive function tests and balance assessments and completed a skills session on Tuesday without any problems," said Batty.

Wasps prop Mullan, 26, won his only cap as a replacement against Italy in 2010.

Apart from his inclusion for Corbisiero and scrum-half Ben Youngs for Danny Care, this is the same squad that secured a 31-12 victory over Argentina.

Youngs, a late withdrawal from the bench against Argentina with a hip complaint, has been given the all-clear for this week.

Northampton and Lions prop Corbisiero, 25, who replaced Marler for the second half against Argentina last weekend, was thought to have recovered from the knee injury that saw him miss the win against Australia in the opening autumn Test.

But Lancaster said: "Alex took part in Tuesday morning's forwards training session but suffered some discomfort to his knee.

"He did not train on Tuesday afternoon and will not be available for selection for the weekend.

Who is Matt Mullan?

"It's disappointing for Alex having missed last year's Six Nations because of an injury to his other knee.

"With Mako also unavailable, it's a great opportunity for Joe Marler and Matt Mullan, who has been with us all week and is raring to go in the 23."

London Irish wing Yarde failed to recover from his hip problem, while Wasps winger Wade will miss the game against the world champions with a tight hamstring.

Lancaster added: "We've had a good start to the week and now it's a case of tapering down the training and getting ourselves ready for the ultimate challenge.

"The Twickenham crowd has been great over the last two weeks and we know they will be just as vocal as they were against New Zealand last year."