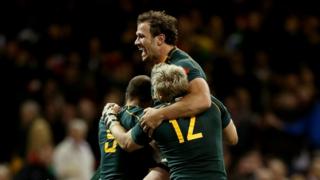 Wales still only have one win over South Africa in their history after a clinical Springboks side beat them 24-15 at the Millennium Stadium in Cardiff.

Tries from Jean De Villiers and Bismarck Du Plessis gave the visitors a 17-6 lead but the faultless boot of Leigh Halfpenny kept the Welsh in touch.

A controversial Fourie Du Preez score sealed things in the second half condemning Wales to their 17th consecutive loss to the southern hemisphere 'big three'.