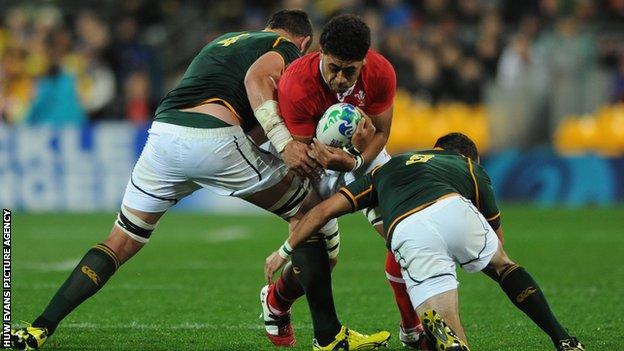 Rob Howley believes victory over South Africa on Saturday would be a bigger achievement than when he led Wales to their first win over the Springboks.

Assistant coach Howley was captain in 1999 when Wales beat the then world champions 29-19 in the first game played at Cardiff's Millennium Stadium.

The Six Nations champions open their autumn internationals against the Boks.

"If this side is successful, it will be a better victory than the one we achieved in 1999," said Howley.

For us to be involved in potential World Cup finals, we have to beat southern hemisphere sides along the way

"When you look at our side and the South Africa side, it will be up there with the best."

Wales have beaten South Africa just once in the 26 meetings between the countries.

The Springboks edged to a 17-16 victory when the sides last met, in Wellington at the 2011 World Cup in New Zealand.

Wales, who won the 2013 Six Nations title, will face a South Africa team who were runners-up to New Zealand in the Rugby Championship in the summer.

The Boks have only lost two of their last nine games and they were both against the All Blacks.

Howley admits if Wales want to be viewed as genuine contenders for the 2015 World Cup in England they have to beat southern hemisphere sides regularly.

"For us to be involved in potential World Cup finals, we have to beat southern hemisphere sides along the way," said Howley.

"You have to do that before, rather than during [the World Cup].

"That is why it is key for us to do it over the next three and four weeks."

Wales face South Africa having named a side with 11 British and Irish Lions in the starting line-up.

Howley was part of the Lions coaching team which recorded a 2-1 Test series victory over Australia in 2013.

The assistant coach, who guided Wales to the 2013 Six Nations title while Warren Gatland was on Lions duty, reveals he has seen a change in the confidence of the Welsh Lions.

"The confidence and self-belief after the Lions tour was huge," said Howley.

"You can see a difference in their mindset, and I think the emotions of our Lions players, in particular, has been different.

"There has been a positive mindset after a wonderful experience in the summer and they need to bring that to the national jersey on Saturday.

"I'm not saying they haven't had it before, but when we played South Africa back in 1999 and beat them for the first time it psychologically had a huge affect on you.

"It aided us as players back then and I am sure it has with the players involved with the Lions."