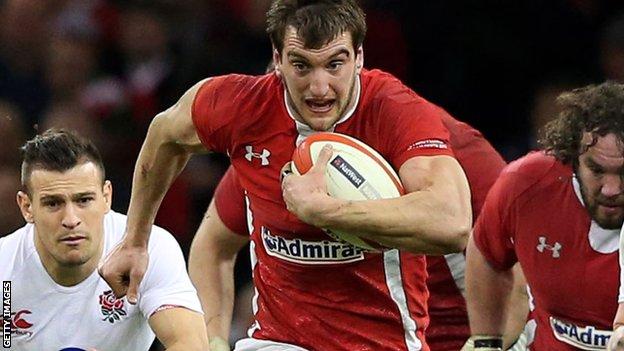 Wales begin their campaign against South Africa in Cardiff on Saturday and finish on 30 November with Australia, who lost 20-13 to England last weekend.

"England can do it, they can beat these southern hemisphere sides in the autumn, so can we," said Warburton.

"And until we do that we can't say we're genuine World Cup contenders."

Wales' last win against Australia came in 2008, and they have beaten South Africa only once in their history - 29-19 in the opening game at the Millennium Stadium in 1999.

New Zealand hold an even longer winning run over Wales, with the All Blacks' last defeat coming in 1953.

The Welsh have won the last two Six Nations championships, and clinched the 2013 title with a 30-3 defeat of England in Cardiff.

But they continue to come up short against the southern hemisphere countries, with Warburton determined they should rectify that failing.

"People are talking about World Cups already," said Warburton, who captained the 2013 British and Irish Lions to a series win in Australia.

"But if people want to talk about Wales being [World Cup] contenders then we have to beat one of these southern hemisphere countries."

If Wales are to make a breakthrough they will have to show a dramatic improvement on their performances in the 2012 autumn series, when they lost to Samoa, Argentina, New Zealand and Australia.

"Last year was a really bad one for us," admitted flanker Warburton.

"Zero out of four - all the players know that's not really acceptable at all. But there's a lot of optimism this year especially going into this game with South Africa."

Saturday's opponents are a formidable proposition, having lost just twice in nine matches in 2013 - on both occasions against the All Blacks.

"Samoa and South Africa are the two teams I find physically the toughest to play against," said Warburton.

"South Africa have got a great skill level anyway but from a physicality point of view they offer a lot and that's a great challenge for us Welsh boys."

The Cardiff Blues flanker also believes the combination of Wales' tendency to make a slow start and the quality of the opposition means Saturday's game is likely to be the toughest of the autumn.

"That's no disrespect to Argentina or Australia but because it's first one up and the first game we've always seemed to have found most difficult - you need a game to sort of get going really."