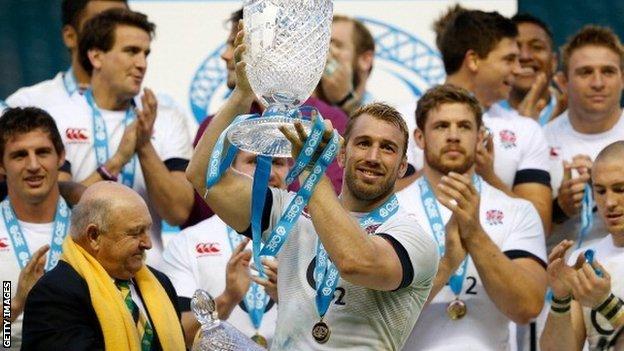 - Which of England's current crop would make the 2003 World Cup-winning team?

- Will England qualify for the 2015 Rugby World Cup knockout stages?

- Which of Dan Biggar, Rhys Priestland or James Hook should line up at outside-half for Wales?

With Billy Twelvetrees not having his best game in the 20-13 win against Australia and with Northampton's Luther Burrell being the form inside centre at the moment, do you think Burrell should start against Argentina?Daniel Grimsey

Hi Daniel, given the nature of the game, Twelvetrees hardly touched the ball. It's hard to analyse because he was involved in so little. His performance will be remembered for his missed tackle on outside-half Matt Toomua a few yards out from England's line that resulted in a try, and the penalty he gave away soon after that resulted in three points for Australia.

He got himself in a poor position to tackle Toomua and his technique was poor from thereon. He went off his feet four minutes later to give away the penalty, trying too hard, I think, to make amends for letting Toomua in. After a performance like that, it shouldn't be a surprise to lose your place.

Twelvetrees is in the team primarily to create opportunities in attack. The ball has to be in his hands and he touched it about four times and didn't kick it once; that says a lot about how the team played. I would stick with Twelvetrees and make sure he gets some ball to work with.

Jeremy, I thought that Lee Dickson was poor against Australia and England only really picked up when Ben Youngs came on at scrum-half. Do you think that this match showed just how underrated Youngs really is? Montyk

Hi Montyk, Dickson's selection was a bit left-field given Youngs is more experienced and hadn't had a particularly terrible start to the season. I believed Dickson's selection meant England were going to play a more up-tempo game, with Dickson farming the ball out quickly to the first receiver.

It was hard on Dickson to be taken off straight after Chris Robshaw's try. England were on a high. If the intention was to play quicker then Dickson has to be given another chance, along with the others that provide the platform for quick ball.

With England's line-out not functioning well until the second half - when Dylan Hartley came on - do you think that Hartley deserves to start the next game against Argentina? After all, his Northampton team-mates Courtney Lawes and Tom Wood both jump in the line-out. Daniel Grimsey

Hi Daniel, to be fair nothing went particularly well in the first half for England. It wasn't just the line-out going wrong. Hooker is a position that's a close contest in the England team so to give Hartley a start against the Pumas wouldn't be so out of order.

Hi Jerry, everyone is getting excited after England's win. However, with the 2003 squad watching on, it did put into perspective the strength of this England team. I don't think any of the current crop would've got in the team in 2003. Do you think that the current bunch have the potential to become anywhere near as good as 2003 and challenge for the World Cup in 2015? Jack alhadeff

Hi Jack, this England team does have potential; both individually and collectively there is talent in the squad. The squad of 2003 was built on the success of past England teams that weren't half bad; this current squad have been built pretty much from scratch off the back of several unsuccessful years internationally so have started way behind in comparison to the legends of 2003.

When the potential will be fulfilled is the hardest question to answer. It's stop and start at the moment. A great win against New Zealand 11 months ago, followed by so nearly a loss against Italy at Twickenham in the Six Nations and a thumping defeat against Wales in the Six Nations finale. Currently, I would say England would qualify at least second in their Rugby World Cup pool and anything can happen in the knockout stages.

Jerry, do you agree it would be a crime not to pick Christian Wade for England next Saturday? Once again at the weekend he showed his awesome attacking threat. Burra.

Hi Burra, we all love to watch Christian Wade. He is one of the most electrifying players playing in England at the moment. His speed and acceleration, steps and handling are breathtaking to watch. It's not a crime not to select him, however he is pushing harder than any other player I can see for an opportunity to start a match.

Hi Jeremy, although I was delighted to see an English victory at the weekend, I could not help but feel that the midfield axis is still a long way from perfect. When is Stuart Lancaster going to give the young creative players like Kyle Eastmond a run-out in a big game to see if he can provide that spark that I feel England need to really strike fear into opposition defences? Dom

Hi Dom, nothing really clicked for England at the weekend. The midfield was only one combination of six that didn't really blow us away with their performances. There's no point having a player like Kyle Eastmond at inside centre if, like Twelvetrees, he only touches the ball four times. England will make life difficult for the opposition when they produce quick ball phase after phase in attack. Look how well it worked against New Zealand last season and Brad Barritt was at 12 in that game.

Jeremy, who do you think should start at outside-half next weekend for Wales against South Africa? Dan Biggar, as the man in possession, or Rhys Priestland, who is in great form and will more likely get the backline moving better? JPR

Hi JPR, with Leigh Halfpenny in the team you don't have to think about having a 10 that can kick goals, which is a comfortable place to be. Between Biggar, Priestland and James Hook, I think Hook is the best attacking 10 and I would select him. I'm pretty sure Warren Gatland won't.

Jeremy, do you think that home advantage is now gone? In the Premiership to date this season it seems to have counted for nothing. Why is that? Bruce Almighty

Hi Bruce, I believe the league is becoming more and more competitive. There aren't many, if any, easy games anymore. Home teams still win more than away teams and I can't see that changing. Ever.