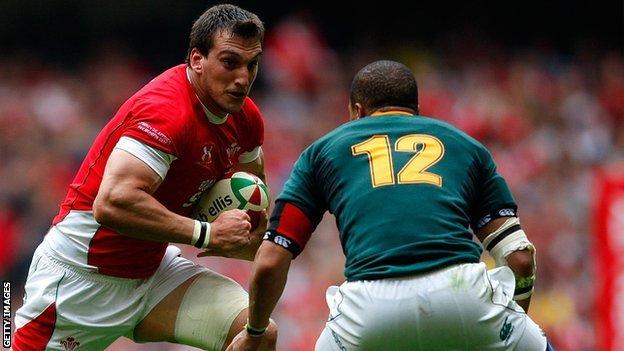 A 2013 British and Irish Lions team packed with Welshmen sealed a 2-1 series win in Australia.

But Wales have not beaten November rivals the Wallabies in seven attempts and won only once against South Africa.

The Lions tour leader and his team-mates will not face world champions New Zealand in their forthcoming Tests - a nation Wales have not beaten since 1953.

Instead Wales also host Rugby Championship nation Argentina, plus Tonga during the autumn.

South Africa, the 2013 Rugby Championship runners-up, who Wales have beaten once in 26 attempts, are the first visitors to Cardiff's Millennium Stadium on Saturday 9 November.

Clashes against the Pumas, Sea Eagles and Wallabies follow on successive weekends as Wales seek to make amends for a 2012 autumn whitewash.

Australia come up against their Lions coaching nemesis Warren Gatland's side on Saturday, 30 November.

Wales won a Six Nations Grand Slam in 2012 and successfully defended their title in 2013.

But in between those successes, Warburton, his team-mates and Gatland were criticised as Wales lost eight successive games.

Four of those defeats came against the Wallabies, who have beaten Wales 25 times in 36 encounters with one draw between the two nations.

Wales have won only once in 26 attempts against South Africa, including their last encounter against the Springboks, in New Zealand.

Warburton wants Wales to defy that history, much as England did under Sir Clive Woodward and 1997 Lions captain Martin Johnson between autumn 2002 and their 2003 World Cup final win over Australia in Sydney.

During that time England beat South Africa once and New Zealand and Australia twice each, including 2003 tour Tests down under.

Warburton says Wales must achieve the same level of success and consistency.

He added: "It's got to the stage now where we've done well in the northern hemisphere and I always look at the England team of 2003, really, who managed to play the Tri-Nations sides and beat them all.

"And as a group of players that's got to be the next step for us.

"We can keep doing well in the Six Nations because that is your bread and butter really; it's the competition.

"But it's getting to the stage now where we have to start performing in the autumn series and get scalps against these southern hemisphere sides for us this autumn."

three of whom - prop Gethin Jenkins, back-five player Ryan Jones and utility back James Hook - played no part in 2013.

However, Jenkins was in the original Lions selection for this year's trip to Australia only to withdraw from the squad without playing because of a calf injury.

Ankle injuries have ruled out centre and wing from the autumn, while Wales' other 2013 Lion - - is back with Mitsubishi Dynoboars in Japan following his brief return to the international scene in the tourists'

Gatland still can field an all-2013 Lions pack in November while being forced to leave out two more Lions tourists.

Cardiff Blues open-side flanker Warburton says Wales will go into the autumn series boosted by the presence of so many 2013 Lions winners.

"The last time we played here was obviously England 30-3 [to win the Six Nations] and with the Lions boys we had that great success in the summer, which was a massive boost for us.

"So we're probably as confident as we've ever been going into this autumn and I'm really hopeful that we'll do well."