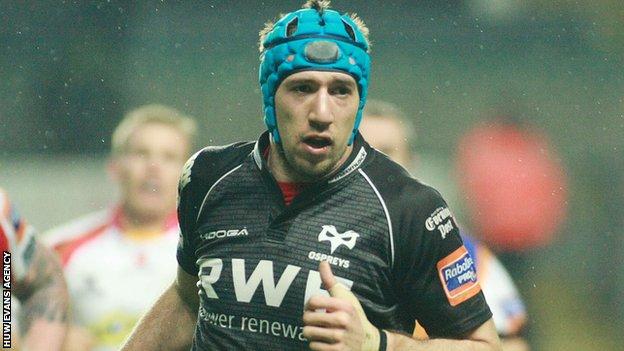 Flanker Justin Tipuric says the Ospreys must win their home games if they are to qualify for the Heineken Cup quarter-finals.

The Ospreys open their Pool 1 campaign by hosting triple European Champions Leinster at the Liberty Stadium.

The Wales and Lions openside claims victory over the Irish province is vital to secure a knockout place.

"We know how important it is to win our home games and that is what we have to try and do," said Tipuric.

The first two games are massive for us.

"If you win your home games, you have a chance of getting through to the next round.

"The first two games are massive for us. They (Leinster) have got all their internationals back and Lions boys back as well.

"They have won the tournament a few times now, so there is nothing better than going up against opposition like them.

"It's not a bad team - it's going to be a tough game all round the field.

"We just have to make sure we look after the ball and try and stop them being as dangerous as they are, especially with turnover ball."

The Ospreys have failed to make it past the quarter-finals of the Heineken Cup and have not qualified for the knockout stages since the 2009/10 season.

The Welsh region has been drawn in the same Pool as former Heineken Cup champions Northampton Saints and Top 14 title winners Castres Olympique as well as as reigning Pro12 champions Leinster.

While the Dubliners have a much better record in the Heineken Cup, the Ospreys have twice shocked Brian O'Driscoll and company in domestic Pro12 finals in Dublin.

But the Ospreys suffered a 18-12 home defeat to Glasgow Warriors on Friday in the Pro12 before their Heineken Cup opener.

Tipuric, along with Alyn Wyn Jones, Ian Evans, Richard Hibbard, Adam Jones and Ryan Jones, is one of six British and Irish Lions in the Ospreys pack.

"They are a bunch of great boys and the team is just getting stronger. Even if we do pick up bumps or injuries, we have got players to fill in."

Tipuric, who played for Wales in the Six Nations title win over England in Cardiff, came off the bench for the Lions in the 41-16 win over the Wallabies in the third Test in Sydney to clinch the series

But he says life has not changed since he returned from the victorious Lions 2-1 Test series victory against Australia.

"You will always be known as a Lion, but you just get on with day-to-day things," said Tipuric

"Unless I have a bright blue skull cap on I am quite alright, people don't take much notice. Even the big nose doesn't stand out that much. So it hasn't been too bad."