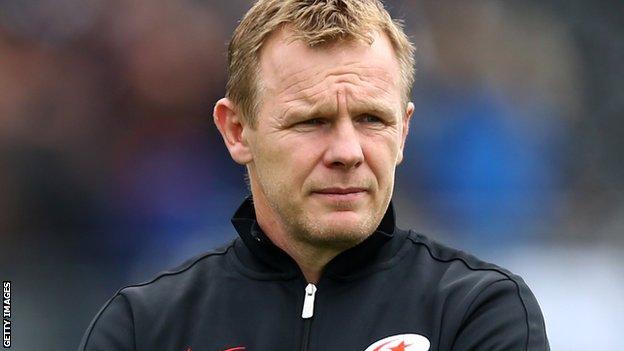 Saracens director of rugby Mark McCall says their 100% start to the season will stand the side in good stead.

Sarries sit top of the Premiership after winning their opening five games.

McCall told BBC London 94.9: "We know that nothing really matters or happens at this stage in early October, but you can give yourself a cushion.

"It might be important when we lose a lot of players to international rugby not only in November, but also in February and March."

The Barnet-based side are six points clear at the top of the table after victories over London Irish, Gloucester, Bath, Harlequins and London Wasps.

McCall made 11 changes to his starting XV for the match against Wasps on Saturday, which Saracens won 19-12, and believes every member of his squad will be needed this season.

We have got to be right mentally and physically. It's a really good, passionate atmosphere there and we have to be on our game

"It's important to expose some of our players to the Premiership, which we did against Wasps, as we will need those players for large parts of the season," he said.

"We made a lot of changes to the team and we have to be delighted with the result.

"It was hard-fought. Wasps were very physical and slowed the ball down. In the last four games we were used to playing with a good momentum, but we couldn't get that.

"Sometimes you have got to roll your sleeves up. It wasn't the perfect performance - far from it - but the job is done."

Saracens now turn their attentions to the Heineken Cup, with a trip to Connacht in their first pool stage match.

"I think in the last four seasons Harlequins, Biarritz and Toulouse have all managed to lose in Galway.

"If that doesn't focus the mind, I'm not sure what does," McCall said.

"We have got to be right mentally and physically. Connacht really step it up in this competition - I know that from my experiences in Ireland.

"It's a really good, passionate atmosphere there and we have to be on our game - but having to grind out a victory against Wasps will not have done us any harm."