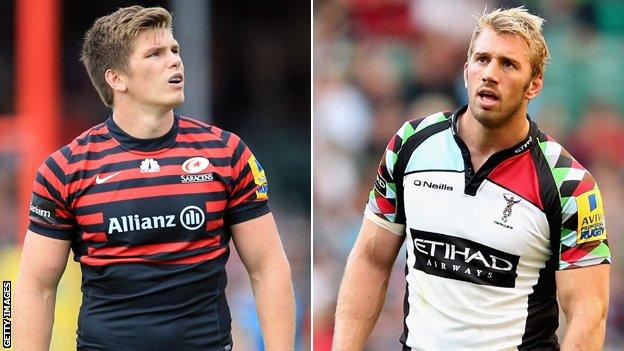 Wasps fans may not want to hear it, but with Harlequins having won the Premiership title in 2012, succeeding Saracens as champions in the process, Saturday's match is now THE London derby.

The hosts are renowned for their fast-paced off-loading game, while Sarries are more known for their powerful pack and rock-like defence.

But Quins have been below their best this season and Sarries are scoring tries for fun, so predicting who will come out on top is a tricky business.

Why is this game so big?

The big London derby used to be Quins v Wasps but because of Sarries' success and Wasps' demise, this contest is now the biggy in the capital.

Saturday's match is what makes rugby so delicious because we have certain expectations of both teams - Quins the off-loaders, Sarries the power-based outfit.

Leaders Sarries do look very impressive at the moment. They have squad strength that allows them to chop and change their team without weakening it too much.

Hosts Quins have got all big guns on display and will want to make a statement at the Stoop - losing isn't on the menu.

Sarries are the team in form

Sarries victory last weekend against Bath wasn't a surprise but the manner in which they dispatched an in-form team was very impressive.

They dominated Bath and had the game sewn up by half-time, with wing David Strettle's second try on 40 minutes clinching the bonus point.

They've started to score tries, which will be a worry for other teams but a breath of fresh air for neutrals, and if that trend continues they will be unstoppable because their defence is as stingy as always.

All teams know that it's Sarries' imposing pack that lays down the foundation for all their victories.

The Vunipola brothers catch your eye not just by their individual size but their sheer lust and appetite to carry a rugby ball and obliterate anyone who has the temerity to try and stop them.

Billy, the younger, is playing at number eight so we will definitely see him picking up from the base of the scrum and more than likely carrying Danny Care a few yards, as well as the ball.

The Sarries pack is well drilled in the set piece and generally have a good say at the breakdown, I'll be very interested to see if Quins bosses Conor O'Shea and John Kingston have come up with a plan to get some parity in that department.

Quins need this win to demonstrate they aren't a one trick wonder after winning the title a couple of seasons ago by playing some really dynamic, ambitious rugby.

Last season, when they were defending their title, they faded away at the end with little impact and that's not good, they need to re-establish themselves and a win against Sarries would be a big statement of intent - both teams know it.

Have Sarries changed their style of play?

You have to admire Sarries' doggedness and hard-nosed approach but I now get the feeling they understand the importance of scoring tries.

Newcastle to lose to Gloucester

As silly as that might sound, I assure you it's not. I think the tacticians at Sarries really believed that not conceding tries would win them title after title, but that's not true.

You have to have the X-factor and defence doesn't supply that - scoring tries does.

Fly-half Owen Farrell is still young at 22 but now established, with 17 Tests for England under his belt, and his kicking will have a big say in this game, particularly if the weather is inclement (although the forecast looks good for Saturday).

Full-back Alex Goode has come back from injury and, against Bath, showed more in attack than he has done playing international rugby. I for one would like to see more of the same please.

Another industrious performance by Chris Ashton will tell his doubters he's prepared to work harder than before and not just wait to score tries.

His defence still needs improving though and make no mistake, scoring tries is what he's all about. One try from three games isn't great.

Are Quins genuine contenders this year?

Last season Quins failed to hit the heights they managed in 2012. They are definite title contenders this time around but this match has to be one that will have a significant bearing on their self-confidence.

Defeat at home would make them ask whether they are good enough.

Quins suffered as a team last season, just like individuals sometimes suffer after a great first season. Backing up is hard and Quins went through second-season syndrome. Dealing with that is second nature to an experienced side like champions Leicester.

Yes, Quins are genuine title contenders, but you can't just talk about it, you have to prove it on the pitch as well.

Is Robshaw under pressure?

This could be Chris Robshaw's time to make a statement and show he is still the reigning champion in England when it comes to open-side flankers.

Playing against this Sarries pack is certainly going to test his skills and to dominate won't be easy for the man who captained England last season.

It would be great to see a demonstration like David Pocock produced against South Africa when Australia played the Boks in the quarter-final of the 2011 World Cup.

That's probably asking too much, although I feel he needs a great game like that to stop the questions being asked about his place in the England team.

There are some mouth-watering match-ups

As always, kicking will have a big say and currently Farrell is at 83% with Nick Evans on 67% from the tee - that tells the story in that department.

Quins fly-half Evans is a fine player but has yet to find his mojo this season. I feel he has too much class not to have an impact but nothing short of his best will be good enough against Farrell and Sarries.

Scrum-half will see a big contest between Richard Wigglesworth and Care. I thought Care was very unlucky not to start as England's number one last season - he was the form nine - but Ben Youngs stepped up well.

Wigglesworth and Care have had similar game time this season and their carries and metres run stats may reflect their team's gameplan - Care has had 24 carries and made 186m running with the ball while Wigglesworth has 15 carries and 36m!

The battle of the full-backs - Mike Brown v Goode - is another intriguing match-up . Goode has to show us his attacking ability more, otherwise I don't see the point of him playing instead of Brown or Ben Foden for England.

A full-back should be picked because of his attacking qualities more than just his ability to kick the ball out of his own half.

And then there's Joe Marler v Mako Vunipola at loose-head, where Mako has to be ahead after his brilliant Lions tour.

The only way I see Marler getting his nose in front is if he improves his scrummaging, which isn't Mako's forte.

When it comes to carrying the ball in the loose you'd be hard pressed to find a better prop in the world than Mako, he rules that department.

So who's going to win?

Sarries have a chance to really shine and show the rest (who rightly don't matter to them) that they have the ability to win games not just by kicking, defending and scoring three points at a time, but by scoring good, well-worked smart tries.

If Quins are to win they have to unearth a thunderous performance, which I think people doubt they have in them.

However, I believe Quins will find the performance to beat Sarries, they're a good team and when their off-loading game clicks they're still a massive force in the English domestic league.

Having said that, if it rains I believe Sarries will win, so Quins will be hoping London is enjoying a glorious Indian summer come Saturday.