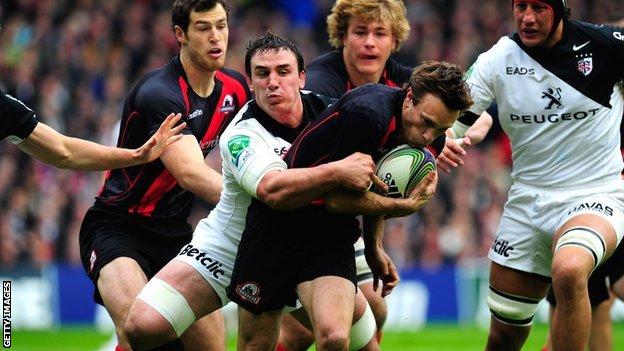 The Welsh, Scottish and Irish Rugby Unions insist their clubs will not participate in any European competition unless it has the "full approval" of the International Rugby Board (IRB).

English and French clubs will quit the Heineken Cup next year and have proposed the rival Rugby Champions Cup.

But the IRB says all competitions must be run by unions and not clubs.

The Scottish Rugby Union (SRU) said it is "fully committed to the development of a pan European rugby competition".

The SRU, which stressed any competition must be supported by national governing bodies as well as the IRB, added: "We welcome the recent comments made by the IRB chairman, who confirmed that a pan European tournament remains the goal of the IRB - we are confident this can be achieved.

"Scottish Rugby remains committed to working with our colleagues across Europe and encourages all parties to fully engage in meaningful negotiations."

Statements issued by the Irish and Welsh Rugby Unions, whose sides play in the RaboDirect Pro12 league alongside the Scottish regions, were worded in a near-identical fashion, and their stance was backed by the Italian federation as well.

Craig has been central to the English and French clubs' plans to set up the new competition in place of the Heineken Cup, a tournament Craig says is "finished - it's over".

"If the competition [Rugby Champions Cup] is not approved then that would have absolutely catastrophic implications for Celtic rugby," Craig told BBC Sport.

"Celtic teams would be without significant revenues. The Rugby Champions Cup is a way to save European rugby."

All the Pro12 clubs - from Wales, Scotland, Ireland and Italy - currently participating in the Heineken Cup and Amlin Challenge Cup, which are run by the company European Rugby Cup (ERC), have received invitations to join the Anglo-French breakaway competition.

Craig, who is also owner of English Premiership side Bath, believes every Pro12 team is prepared to sign up to the new competition, but that they are being held back by their national governing bodies.

He has warned the national unions against interfering, and also indicated that they and the International Rugby Board (IRB) could face court action if they attempt to stop the Rugby Champions Cup.

English and French clubs gave notice 15 months ago of their intention to leave the Heineken Cup at the end of the 2013-14 season, citing preferential qualifying criteria for Celtic sides and uneven distribution of revenues as their main reasons for quitting.