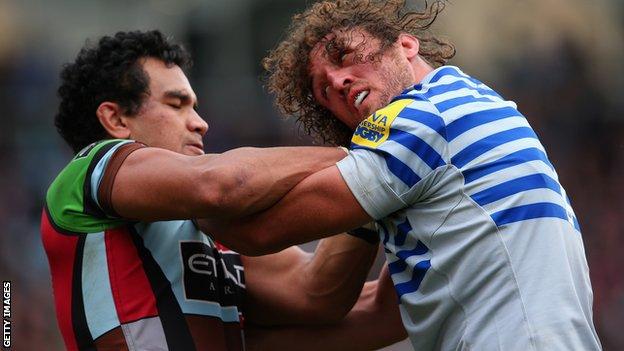 Saracens maintained the only 100% record in the Premiership this season by winning at the home of fellow title contenders Harlequins.

Chris Ashton crossed for the only try to keep Sarries top of the table.

Earlier, Nick Evans had kicked four first-half penalties to put the hosts 12-6 ahead at the interval.

But Owen Farrell produced a near-faultless display from the tee, contributing 17 points to earn a fourth victory in four games for the visitors.

In a meeting between two of the sides expected to be challenging for the Premiership crown in May, Saracens were rewarded for their second-half dominance. Their failure to collect a bonus point, having done so in their previous three matches this season, was only a minor disappointment.

As for Conor O'Shea's men, who lie fifth in the standings, they have now lost both of their home fixtures at the Stoop so far this term.

Harlequins were six points up at the end of an attritional first period, all of the points coming from the respective boots of fly-halves Evans and Farrell.

Borthwick is only the second player to reach that milestone and is now just 11 games short of George Chuter's appearance record (261).

Kelly Brown, making his return from an ankle injury, came closest to a first-half try for Saracens.

The visitors worked a short line-out to send the Scotland captain clear, and only a sensational defensive effort from Tom Williams prevented back-row forward Brown from grounding the ball.

A mass brawl followed in the immediate aftermath, following which Quins flanker Maurie Fa'asavalu was sent to the sin bin for pulling the hair of Jacques Burger.

Farrell began the second period by missing a routine penalty but he played a vital role in Saracens' try.

The England and Lions man burst through Tom Casson's limp tackle and passed inside to centre Chris Wyles, who fed winger Ashton to cruise in under the posts, before Farrell slotted over the conversion to put Mark McCall's men in front for the first time.

Soon afterwards, Joe Marler received a yellow card for pulling down a maul and Farrell added two more penalties while the Harlequins prop was off the field to extend the advantage to 19-12.

Buoyed by their improvement after the break, the visitors stretched the lead to 10 points with Farrell's fifth successful penalty, while Evans was unable to clinch a losing bonus point as he failed with a late three-point attempt of his own.

"They are physically very powerful and were the better side on the day. We played well in the first half, but in the second half we just didn't hold on to the ball for any length of time.

"Saracens have huge strength in depth and probably have most of their key players fit. Everyone knows they are an excellent team and will take some stopping, but Northampton went six from six at the start of last season. Things change drastically in the season.

"We're disappointed to lose at home, but it's important the players don't feel sorry for themselves. We're fine and I'm very comfortable with the group of players we have."

"In many ways that was the most satisfying win we've had this season. Gloucester, Bath and Quins in a row was a tough ask, but it's been the manner of the way we started - we've played some decent rugby along the way.

"We've got off to a flyer, but Northampton look incredibly impressive.

"It's not about how you start, it's about how you end. We just always want to be there or thereabouts and put ourselves in the frame for the top four, but we never look too far ahead."