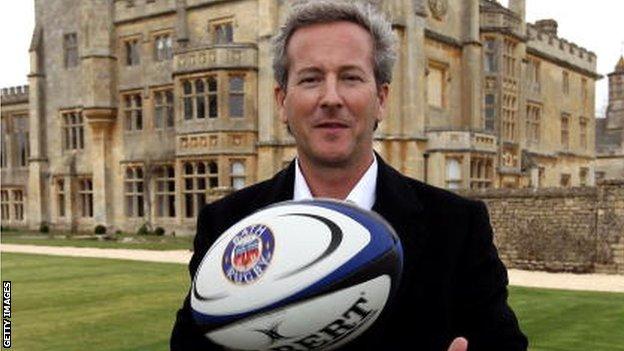 Craig has been central to setting up an event intended to replace the Heineken Cup, which he claims is "finished".

"If the competition is not approved then that would have absolutely catastrophic implications for Celtic rugby," Craig told BBC Sport.

"Celtic teams would be without significant revenues."

He added: "The Heineken Cup is finished, it's over. The Rugby Champions Cup is a way to save European rugby."

Premiership Rugby, the umbrella company representing top-flight English teams, and their French counterparts, the Ligue Nationale de Rugby (LNR), announced the creation of the Rugby Champions Cup for the 2014-15 season on Sunday.

All the Pro12 clubs - from Wales, Scotland, Ireland and Italy - currently participating in the Heineken Cup and Amlin Challenge Cup, which is run by the company European Rugby Cup (ERC), have received invitations to join the Anglo-French breakaway competition.

Craig, who is chairman of Bath, believes every Pro12 team is prepared to sign up to the new competition, but that they are being held back by their national governing bodies.

He has warned the national unions from interfering, and also indicated that they and the International Rugby Board (IRB) could face court action if they attempt to stop the Rugby Champions Cup.

"If all 38 [European] clubs were actually given the opportunity to come into the Rugby Champions Cup, I believe all 38 would probably agree," said Craig, a former scrum-half with Paris side Racing Metro. "It's basically the Celtic unions that would stop them from participating.

"Everyone would prefer that we didn't go down the legal route. We all want a competition that is a fabulous European competition.

"The reality though is that if there was to be a blockage there are obvious questions around restraint of trade. This new Champions Cup would generate in the region of 60 to 70 million Euros minimum, which would actually cut out a big percentage of the English and the French clubs' losses."

The English and French clubs gave notice 15 months ago of their intention to quit the Heineken Cup in 2014, citing preferential qualifying criteria for Celtic sides and uneven distribution of revenues.

Craig contends that while English clubs each receive around £800,000 annually for participating in the Heineken Cup, the figure is closer to £3 million for some Celtic clubs.

That leaves the latter severely financially exposed in the event of there being no European club competition next season, he claimed.

"The amounts of money that is generated in the English and French games through our domestic leagues accounts for approximately 80% of our revenues, so the implication of not playing in a Heineken Cup is much less serious for French and English clubs as it is for the Celtic nations," said Craig, who confirmed there would be no English or French club representatives at the next ERC stakeholder meeting in Dublin on 23 October.

"At the moment, for the 2014-15 season there is no European rugby. This competition is one in which all the clubs are invited to play and there will be an equal distribution of money on a per team basis.

"The reality of it is that if the Rugby Champions Cup doesn't happen, then the Celts will not be playing in a competition and they won't have those distributions from that competition.

"People say the English and French clubs are greedy. The fact is we are losing money.

"In terms of sustainability and the future of the game, this is an opportunity for us to increase revenues into the English and French club game which gives it more viability. The unions should be approving that so there is continuity in English, French and Celtic rugby, because if there is isn't there would be financial oblivion for the Celtic countries."

Craig, who is bilingual having built up and sold a multi-million-pound pharmaceutical business in France before buying Bath, has been Premiership Rugby's chief negotiator with the French clubs, working closely with Paul Goze, president of the Ligue National de Rugby.

But a stumbling block for the Anglo-French tournament could actually come from within France, with the French Rugby Federation (FFR) having this week announced its support for ERC.

However, Craig claims that the FFR's show of support for the Heineken Cup represents an about turn. The federation had previously given notice to leave ERC too, he claimed, and had also proposed the creation of a Swiss-based company to run a new tournament.

"I find it very ambiguous that the FFR is now saying that they are not approving a competition which, in effect, they did approve," said Craig. "The negotiations with European Rugby Cup are finished.

"We've only got 12 months left until the new competition needs to start. We need to organise the event and we can't do that a month before the competition's going to start. That's why we've said the time is up now."