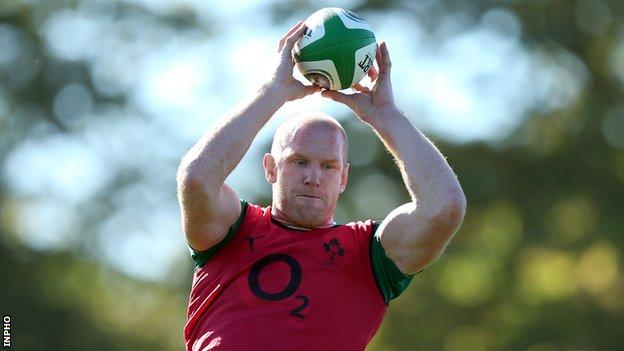 Schmidt, during his time as Leinster boss, expressed surprise that O'Connell was not cited after an incident in a Pro12 game against Munster in April.

However, O'Connell, 33, had only positive words about Schmidt on Monday.

"We've only had a small number of sessions with him but they have been really enjoyable," said O'Connell.

"Any time you work with someone new and as successful a coach as Joe Schmidt, it is always a good thing.

"Joe has a tried and trusted way of running his coaching staff and running the teams he coaches, and you look at the success he has had with Leinster over the last number of years and it is hard not to trust that."

Back in April, Schmidt made clear his unhappiness that Munster star O'Connell had not been cited after connecting with Leinster player Dave Kearney's head while attempting a fly-hack upfield.

New Zealander Schmidt had emphasised his respect for "top-quality bloke" O'Connell but added: "In 12 years of professional coaching, I don't think I've ever seen a contact like that."

But there was no hint of any tension between 85-times capped O'Connell and the new Ireland coach on Monday.

"This is our first time working with John, and he has a great rugby CV, having worked in so many great places, particularly Wellington and with the Sharks (in South Africa) for the last number of years."

Schmidt twice led Leinster to Heineken Cup final triumphs, but he has now arrived on the international stage after succeeding Declan Kidney on a three-year contract that incorporates the 2015 World Cup.

His first match in charge of Ireland will be against Samoa in Dublin on 9 November.

After the injury crisis that devastated Ireland's Six Nations campaign last spring, Schmidt spoke about the importance of developing strength in all positions in the squad.

"Right from the back to the front of the team you want to build strength in depth," he said.

"We found out last season that you are only a few injuries away from being made a little bit vulnerable.

The former Leinster coach indicated that he and his coaching team would not make any decision on who to appoint as captain until just prior to the autumn internationals.