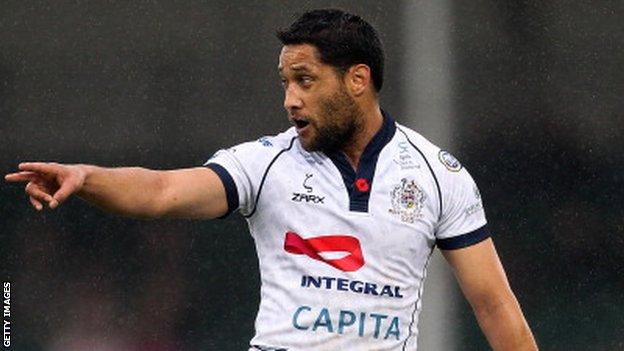 Bristol scrum-half Ruki Tipuna has admitted his side are following a risky strategy as they bid for promotion.

Bristol got their Championship campaign up and running on Sunday with a bonus-point win over London Scottish.

Tipuna said the club's plan is to try to play at a high tempo and exhaust the opposition in each match.

"It's a dangerous game we're playing sometimes, but we're confident we're a fit team and that we can run teams off their feet," he said.

What we know we're doing is running the opposition's lungs out

Bristol's 31-18 win at The Memorial Stadium followed a 23-21 loss at Cornish Pirates on the opening weekend of the campaign.

Tipuna told BBC Radio Bristol: "What we know we're doing is running the opposition's lungs out.

"The same thing happened last week in the first game but unfortunately we didn't finish as strongly as we did this week.

"We ran London Scottish off their feet and we'll do that for the rest of the season."

Bristol director of rugby Andy Robinson echoed the point that his team would play with attacking vigour.

Speaking after the win against London Scottish, Robinson said: "I thought the ambition we played with was really good, right from the first whistle. The movement of the ball was exceptional.

"We've got to learn to take our chances, but the way the players went out to play was really pleasing."