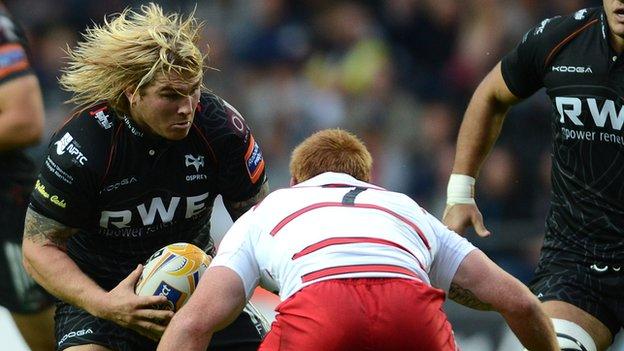 However, Ospreys' Lions flanker Justin Tipuric was sin-binned for a second-half tip-tackle.

Having entered the fray as a 37th-minute replacement for knee-injury victim Tom Smith, open-side Tipuric became embroiled in one of the game's controversies.

He was yellow carded on the advice of television match official Paul Adams 10 minutes into the second period after an incident that sparked a confrontation among the forwards.

But even without the Wales flanker, the Ospreys were able to conjure tries by Hibbard and Walker.

Summer signing Hassler began the rout, powering over after Evans began to establish his set-piece presence for Dan Biggar to convert.

Harry Leonard had given the visitors their only first-half points shortly before Walker's touchdown.

The opening period ended on a low after Smith was carried off on a stretcher with a suspected dislocated knee, having also been struck by Edinburgh hooker Aleki Lutui's swinging arm as he was brought down.

Lutui's indiscretion did not come to the attention of the match officials, but television replays were clear cut.

However, the hooker's actions did not appear to contribute to the lower-limb injury Smith suffered.

Soon after the break Hibbard profited from Evans' close-range line-out take and return pass to the hooker, who powered over on the blind-side.

Edinburgh had brief hope as Visser made the most of loose Ospreys defence and Leonard converted.

But after that the Ospreys again took control.

After Ashley Beck's long pass, Fussell's kick ahead was perfectly placed for Walker to outpace the cover and gather to score.

Three minutes from the end diminutive Ospreys fly-half replacement Morgan sidestepped through the Edinburgh defence deep in his own 22 before racing clear to score at the left-hand corner.

Morgan then converted from the touchline.