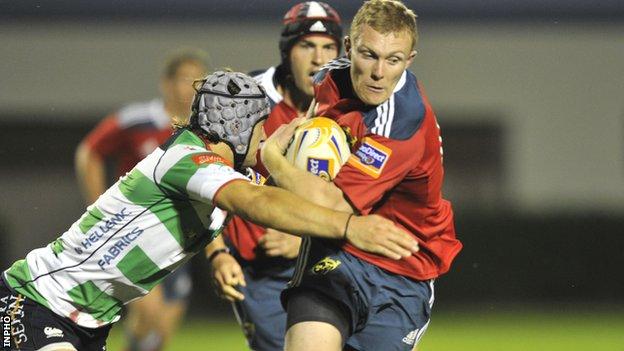 Munster have slipped to second spot in the Pro12 table after Friday night's surprise defeat by Treviso in Italy.

Keith Earls scored an early try for the visitors before a penalty try helped Munster to a 12-9 lead at the break.

Stephen Archer touched down as Munster moved 19-9 ahead but Treviso hit back quickly with a Ludovico Nitoglia try.

Treviso led after Nitoglia's second try while Mat Berquist sealed a memorable victory for the Italians at Stadio Monigo with his fifth penalty.

Munster missed out on the chance to become the first side ever to begin a league season with maximum points from their opening three games.

The Irish team were guilty of ill discipline with three players enduring spells in the sin bin.

Things began well for Munster as they bossed the opening stages with Earls opening the scoring with a seventh-minute try.

But Ian Keatley, having already missed a penalty, was off target with the conversion, and two Berquist penalties soon saw the momentum swing the other way while Niall Ronan became the first Munster player to be yellow-carded.

Munster regained the lead with a penalty try when Treviso's scrum collapsed after a gutsy call from captain Peter O'Mahony, Keatley finding his aim this time to make it 12-6.

Another Berquist penalty cut the deficit before half-time but when Archer crossed early in the second half, Keatley's conversion pushed Munster's advantage into double figures and all looked well for the Irish.

That feeling lasted only a couple of minutes before Nitoglia notched his first try, and Berquist's penalty on the hour mark had the teams tied once more.

Nitoglia then dove over from close range for his second score and Berquist sealed it with Munster again down in numbers as Cathal Sheridan took his turn in the sin bin, and he was joined eight minutes later by Archer.