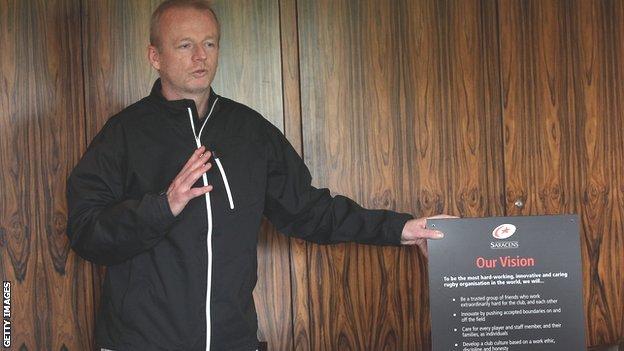 Saracens chief Edward Griffiths says Pro12 sides would be welcome in a new European Cup competition organised by the English and French clubs.

Top-flight English and French sides want to form a replacement for the Heineken Cup from next season.

"There is a solution within a new competition that will meet everybody's aspirations," said Saracens chief executive Griffiths.

Griffiths says he expects the sides in Ireland, Italy, Scotland and Wales to take part in the new-style European tournament.

Roger Lewis, the Welsh Rugby Union group chief executive, has said it would be a "crazy concept" to get rid of the Heineken Cup in the face of an Anglo-French breakaway.

Griffiths rejects that claim and accusations that the English and French clubs are only motivated by self-interest and money.

"You can take a narrow and self-interested approach, but that has never been the approach of the English clubs," said Griffiths.

"If anyone... tries to portray the English clubs as being selfish and self-interested and focused only on money - which when you are losing a lot of money it is not bad to be focused on - I think it is wrong.

"I don't think we are seeking to tear up the fabric of European rugby.

"We are certainly not seeking to make anyone in European rugby have a worse situation than they currently have.

The 12 English Premiership clubs reaffirmed their intention to put in place the new competition for next season at Wednesday's meeting of owners and chairmen, saying it "should be progressed with urgency" and "be open to teams from other countries".

ERC claims that any new tournament would require the approval of the International Rugby Board (IRB).

However, IRB chief executive Brett Gosper said the tournament could be sanctioned if the clubs get the backing of their unions.

Griffiths claims the current stand-off between the English and French clubs and the rest of Europe is about changing the balance of power in rugby.

"The balance of power between the unions and the clubs has always been delicate in rugby and I think, in Wales as in England, it has been way too far in favour of the union," said Griffiths.

"Quite frankly, what has a union got to do with a club competition? Very little.

"A union should run the national team and grassroots and community rugby, but the clubs should be allowed to run the competition and do their best to become viable businesses.

"My best guess would be that the English and French clubs will do as they have said - create a competition, which will be open to the Welsh, Irish, Italian and Scottish clubs."