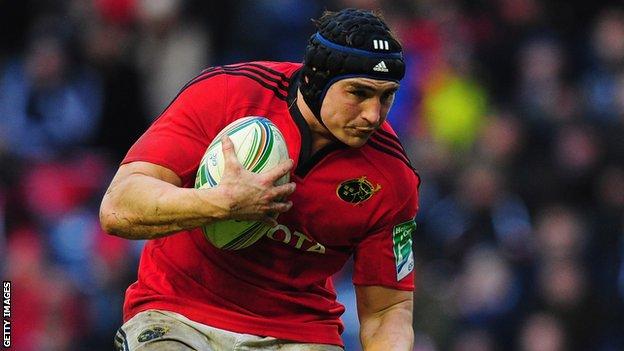 Munster have suffered a blow with the news that emerging flanker Tommy O'Donnell could be ruled out for up to 12 weeks because of a knee injury.

O'Donnell is scheduled to see a specialist later this week but Munster are not optimistic about his prospects of playing in the near future.

The flanker, who earned his first Irish cap against the USA in June, suffered the injury in Munster's win over Zebre.

The back rower, 26, made his first start of the season in last Friday's win over Zebre but had to replaced by Niall Ronan after 67 minutes of the contest.

Munster have received better news about Felix Jones with the full-back likely to resume full training next week.

Ian Nagle sustained a foot injury in the win over Zebre and is likely to be out of action for around two weeks.

Andrew Conway is in contention to line out against Treviso on Friday night despite sustaining a groin strain in last Friday's game.