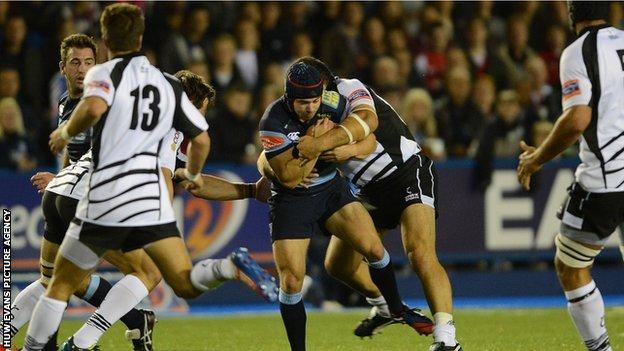 Zebre claimed their first win since being formed with a thrilling victory away at Cardiff Blues.

The Italian side were founded in 2012 and endured a tough Pro12 debut season, losing every match.

But after Dafydd Hewitt had given the Blues an early lead, the visitors fought back with tries from Mauro Bergamasco and David Odiete.

British and Irish Lions man of the series Halfpenny was making his first start of the season after an extended rest following his exertions in Australia.

The full-back kicked six penalties and a conversion, but Zebre fly-half Luciano Orquera converted all three of the visitors' tries as well as three penalties.

Zebre had replacement prop Luca Redolfini sin-binned with five minutes left, but there appeared to be confusion for a crucial passage of play in the closing minutes with the away side still at full strength.

With Redolfini in the sin bin, Dario Chistolini was called back on to complete the front row for a scrum, without anyone appearing to make way for him until the vital phase was over.

Despite the controversial ending, Zebre were good value for their lead up to that point.

Blues had started brightly when fly-half Rhys Patchell put centre Hewitt over after just five minutes - but Zebre gained territory through the running of New Zealand winger Dion Berryman and Leonard, before the pack heaved flanker Bergamasco across the line.

Orquera and Halfpenny exchanged penalties, only for a further Orquera penalty to give Zebre a 13-10 advantage at the interval.

The two kickers continued their duel after the break, but Zebre scrum-half Leonard sent wing Odiete through for a try which Orquera converted.

Halfpenny cut the deficit to a single point with his fifth penalty, but the visitors broke downfield and Leonard finished a flowing move for a decisive try, with Orquera's conversion extending the gap to two scores.

The Blues threw everything into attack and Halfpenny kicked another penalty, but Zebre weathered the late storm to hang onto that precious first win.