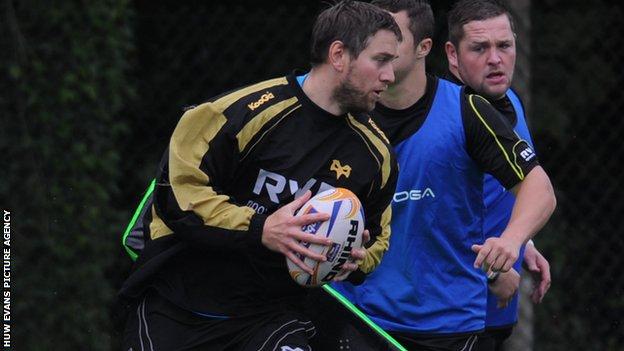 Ryan Jones looks set to return to action for the Ospreys in their Pro12 clash with Edinburgh at the Liberty Stadium on Saturday.

The forward captained the team on the opening weekend in Italy but missed the 29-29 draw with Leinster in Dublin on Saturday.

Jones, 32, is expected to recover from a shoulder injury he picked up in the 24-19 win over Treviso.

"Fingers crossed I'll get the nod from the medical team," said Jones.

"If selected, it'll be great to get back out there in front of our home crowd at the Liberty Stadium."

I've still got huge aspirations for this region to go on and be successful, and be a team that no one likes to play against, domestically and in Europe

Jones could be joined by a host of returning British and Irish Lions in the starting line-up, with prop Adam Jones, locks Alun Wyn Jones and Ian Evans, hooker Richard Hibbard and flanker Justin Tipuric all available to start.

The Ospreys are fourth in the RaboDirect Pro12 table, with six points earned from a win and a draw in their two games to date.

Jones, who has won 73 Wales caps, stepped into the second row in Treviso but is expected to return to the back row for the visit of Edinburgh.

"Listen, it is hugely competitive here but I've always been a case of 'have boots will travel'," said the former Wales captain.

"I'll play anywhere if it means I'm doing my bit for the team. I'll do what's required. We've got huge strength in depth in the back five and it's an achievement just to get a game for the Ospreys.

"We've also got some pretty good players who've enjoyed a summer in Australia and have come back in good spirits, and that also gives everybody a lift."

Added Jones: "Some of our Lions boys have already made an impact off the bench, others are there or thereabouts and are looking to get involved on Saturday, and that's great.

"It means there's real competition for places and that can only drive us forward and help us get better individually and as a team in the coming weeks.

"I'm still as competitive as I've ever been. I've still got huge aspirations for this region to go on and be successful, and be a team that no one likes to play against, domestically and in Europe.

"We are striving to be the best that we can as a group."