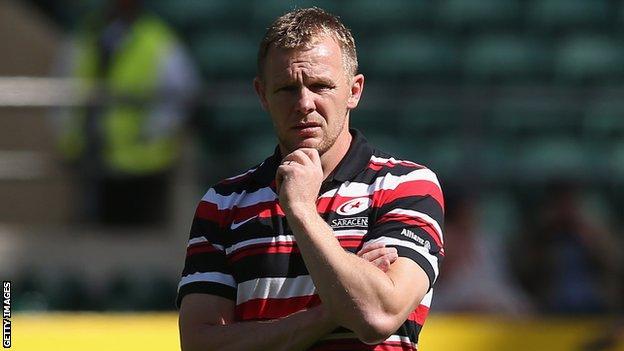 Saracens boss Mark McCall was pleased with the application shown by his side in their 44-12 win over Gloucester.

The odds were in their favour after Gloucester prop Nick Wood was sent off in the second minute of the game.

McCall told BBC London 94.9: "You expect to get the win but you have to do the right things and not be loose.

"To score five tries is good but I am more pleased about the energy, physicality and appetite for work the team are showing."

Sarries trailed 12-10 at half-time despite playing all but the opening 73 seconds against 14 men after Wood was dismissed for stamping on flanker Jacques Burger.

"Gloucester sensibly kicked the ball long and you are playing 60 or 70 meters away from their line. Overall, I was happy apart from a couple of penalties we gave away," director of rugby McCall said.

"We started the second half with the right energy and physicality. Their maul defence was affected by Nick Wood going off and we took advantage of that."

Saracens prop Matt Stevens, however, admitted the side had made "hard work" of the match.

"Gloucester were down to 14 men but stepped up, had extra motivation and played well," he said.

Wood's sending off, for a stamp on Burger's face, was the second-fastest dismissal in the history of the Premiership.

"Nick Wood was pretty sorry for what he did, People do stupid things on the pitch and Nick is a good guy so I don't want to hold it against him too much," Stevens added.

"The intensity was there, there was frustration and he obviously did the wrong thing.

"Luckily he did it to Jacques Burger, who doesn't feel too much."