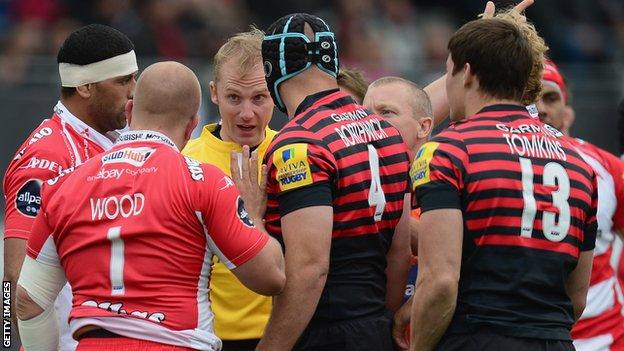 Gloucester boss Nigel Davies says prop Nick Wood has apologised to his team-mates for being sent off after just 73 seconds against Saracens.

The 30-year-old was shown the Premiership's second-fastest red card for stamping on Jacques Burger's head.

Gloucester went on to despite leading 12-10 at half-time.

"Nick's apologised for what happened and has been big enough to do that. He's a good guy and will come back stronger," said Davies.

The fastest sending-off in Premiership history remains Mick Watson's dismissal after 42 seconds when playing for London Scottish against Bath in May 1999.

England Saxons forward Wood has a respectable disciplinary record and went over to the stricken Burger to apologise after the incident.

"Everybody makes mistakes. It's very difficult for Nick. He's in bits in the changing room," added director of rugby Davies.

"I saw it on the big screen like everybody else and it didn't look great.

"Nick is not a dirty player and never has been. He's a good technician and a good rugby player.

"We'll look at the video and take it from there. The red card, as it was seen by the referee, was fair."

Gloucester were down to 13 players for 10 minutes during in the second half, with number eight Sione Kalamafoni sin-binned for dragging down the maul.