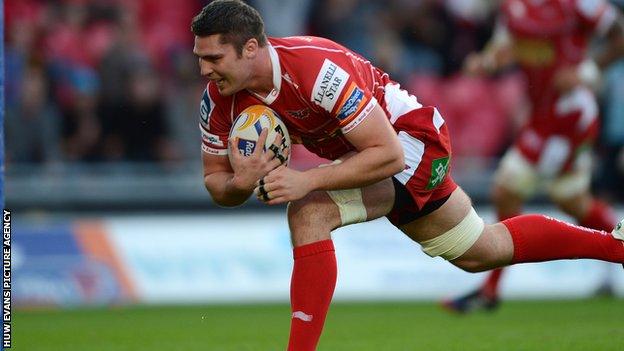 Scarlets captain Rob McCusker has been buoyed by his side's RaboDirect Pro12 win over Benetton Treviso on the back of a heavy defeat to Leinster.

The region bounced back with an impressive 26-10 win over Treviso on Saturday.

That was after the Welsh side lost 42-19 to the reigning champions in their Pro12 opener at Parc y Scarlets.

"We didn't press any alarm buttons and just had some maturity about it and managed the game.

"It [the Leinster defeat] could have been a bit of a monkey on our back," said McCusker.

"But the first thing the coaches did Monday morning was show us some of the good stuff we did against Leinster, which was a positive and set the tone for the week.

"We didn't press any alarm buttons and just had some maturity about it and managed the game.

"It is all about getting the wins and taking the points when they are on offer, but we are gutted we didn't get the bonus point.

"We have the win and that will give us some momentum going to Rodney Parade."

The Scarlets travel to face the Newport Gwent Dragons in the first Welsh derby of the campaign on Friday, 20 September.

Davies' two tries and centre Steven Shingler, who scored 16 points with the boot, proved the difference on the scoreboard.

But the performance of the Scarlets scrum, which dominated a usually well-drilled Treviso scrum, really caught the eye, proving to be a real weapon.

McCusker believes his side's scrummaging ability has not been recognised over the last few seasons.

"We are a bit annoyed that we haven't had the credit over the last couple of seasons," said McCusker.

"We went to Treviso and put in a good scrummaging performance and people just seem to take it as a given that we have had a hard time.

"We have felt aggrieved about that and we have used it as fuel in training.

"Hopefully, we will get the rewards and the front row always shout 'scrum' whenever we get a decision now.

"They want to scrummage because we can put teams on the rack with our platform."