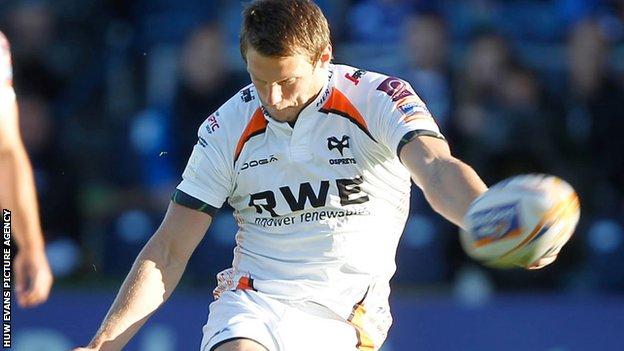 Fly-half Dan Biggar's last-minute penalty earned the Welsh region a share of the points in a 29-all draw in Dublin.

It followed an away win against Treviso on the opening weekend of the season.

"If you'd told me that two weeks ago we'd have six points, I would have taken it," said New Zealander Gibbes.

In fact, Ospreys could have won the game having clawed back a 16-9 interval deficit to lead 26-19 midway through the second half when Leinster had Sean Cronin sin-binned.

But the champions scored 10 points while the hooker was off the field, and in the end Biggar's kick was a reprieve.

However, Gibbes was full of praise for his team's fighting spirit after a disappointing first half.

"We knew at half time we were still there or thereabout we just needed a bit more effort a bit more urgency and the team that came on the second half really delivered in that area."

The introductions of tight-head Adam Jones at half-time and hooker Richard Hibbard in the 58th minute were key for the Ospreys.

Gibbes acknowledged the impact that the British and Irish Lions pair made after the break.

"I'm incredibly proud of the way the boys came on, it's good that we have the selection options," he added.

"We have depth there now so everyone is fighting for a spot, and again the effort they've shown shows how much they want it."

"We're not where we want to be in terms of performance," he said.

"But the good thing is we've got Edinburgh at home next and getting back to the Liberty Stadium is going to be awesome for us."