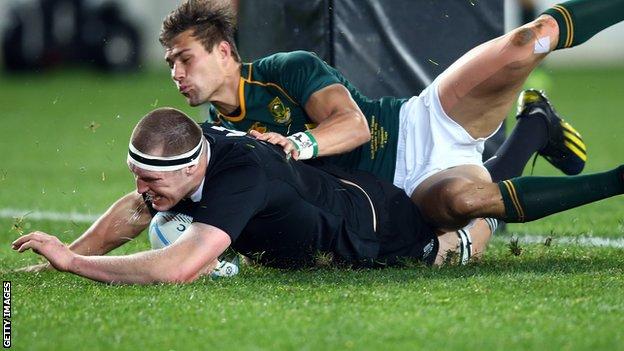 New Zealand moved above South Africa in the Rugby Championship with a gruelling 29-15 win in Auckland.

Two tries from captain Kieran Read and a score from lock Brodie Retallick put the All Blacks in charge, before Sam Cane sealed their bonus point.

Kiwi fly-half Dan Carter suffered a serious shoulder injury in the first half in a hit from Bismarck du Plessis, who was sin-binned and later sent off.

Australia won their first points with a tight 14-13 win against Argentina.

The Wallabies now move above Argentina in the table after their home victory, but it was a match that had little bearing on the top-of-the-table battle between New Zealand and South Africa.

New Zealand, who also lost captain Richie McCaw to a knee injury sustained against Argentina last week, led 17-10 at half time after a bruising opening period at Eden Park.

Read crossed from an early attacking line-out and Retallick finished a sweeping movement sparked by Beauden Barrett's 50-metre burst downfield while Du Plessis was off the pitch for the tackle on Carter.

Carter converted Read's try before Barrett slotted a conversion and penalty for the All Blacks, while South Africa fly-half Morne Steyn slotted an early penalty and converted Du Plessis' 31st minute try from a rolling maul.

The Springbok hooker was then sent off on 42 minutes after a second yellow for elbowing Liam Messam, though the decision to show yellow for his tackle on Carter was judged to be harsh afterwards.

South Africa felt aggrieved, particularly after a strong first half on a ground they had not won at since 1937, but All Blacks coach Steve Hansen defended the decision.

"In an intense battle like that, you're going to get moments and a referee has to make decisions in those moments," said Hansen, who added that Carter could be out for up to six weeks with a damaged AC joint in his shoulder.

"Perhaps Bismarck [du Plessis] may have been unlucky on Dan [Carter]'s yellow card but he probably got the other ones right.

"I don't think it is legal to go putting your elbow in some one's throat - the second card may well have been a red one rather than a yellow.

"But we have got no complaints. That's rugby and you just have to get on with it."

Following the sending off, Read grabbed his second try after sustained build-up and the All Blacks spent the majority of the remainder of the match on the attack with Cane grabbing the bonus-point try.

Replacement back Patrick Lambie scored a consolation try for the Springboks with five minutes remaining and the All Blacks reduced to 13 men after Read and Ma'a Nonu were sin-binned in quick succession.

Australia moved to four points, two clear of Argentina after their narrow win in Perth.

The home side led 14-3 after a try from Israel Folau and three penalties from Christian Lealiifano, but the Pumas gave the hosts a nervy final 20 minutes with Nicolas Sanchez's penalty and a try from Juan Leguizamon.