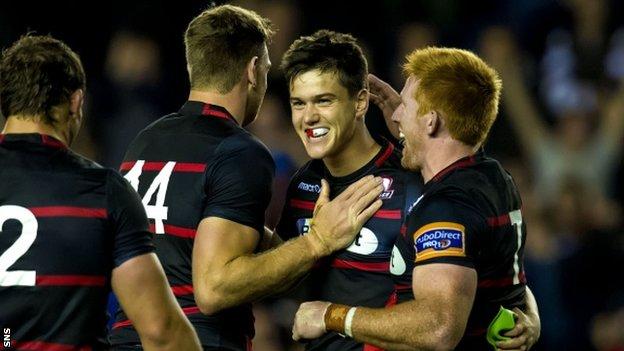 Warriors were the , while a was Solomons' first in charge at Murrayfield.

It is the first time a Scottish side have won here since 2009, so it is a great win because it is a real tough place to come and play

"We put a huge effort in defensively in the second half and, when we managed to get the ball, we did some great things to get close to the line and we were delighted to see James Eddie going over for that try."

Townsend was not totally happy with his side despite winning both their opening league games.

"We gave away too many penalties in the first half and, in the second half, we didn't look after the ball well enough," he said.

"We've got a lot of improving to do. We know we've got to be better, but we take a win.

"It is the first time a Scottish side have won here since 2009, so it is a great win because it is a real tough place to come and play."

"James is fantastic, he's one of our leaders and was voted club man of the year last year just for the positivity he brings," he said.

"He's great whether he starts, he is on the bench or if he's not including, he's always behind the team and he played really well when he came on, not just the try.

"He made a couple of other breaks as well and he was one of the reasons we got back into the game."

Fly-half Harry Leonard was Edinburgh's hero with a last-minute penalty as the capital side recovered from their opening defeat by Munster.

Solomons, who was appointed shortly before the start of the season, thinks the victory will make "a huge difference" to a side that has disappointed over the last two seasons.

"I thought the first half we did well," he said. "The second half, we made a rod for our own back because we made a lot of errors. Our error rate was through the roof.

"But I think the key thing is we kept our nerve, got back into their half right at the end of the game and a great scrum that resulted in the penalty."

Solomons stressed again that it would not be until October that he would be able to fully assess his squad.

"We really have a pre-season within the season, that's just the way it's going to be," said the South African.

"We are just looking for continuous improvement game on game."