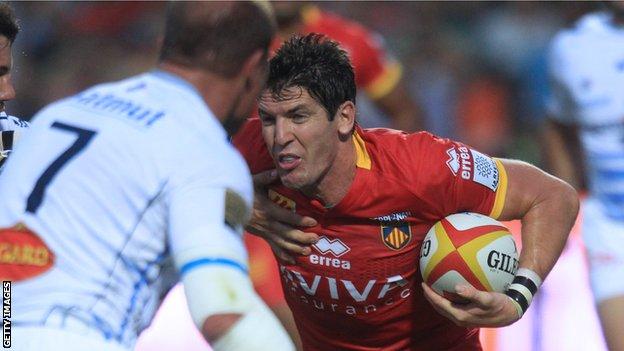 Wales back James Hook has signed a new four-year deal keeping him at French Top 14 side Perpignan until 2017.

The utility player, largely overlooked by Wales since the 2011 World Cup, announced the deal on Twitter.

Hook, 28, says he did not even entertain the idea of leaving the Catalan side or French rugby and is happy his future has been finally sorted out.

"It's just all about how the family have settled here," said Hook.

"It's just a great place to play rugby and live, but it was tough at the start settling here.

"Now I am not interested in moving club or my family. My priority was always to get a new contract here and I am just so chuffed to do that.

Hook has won 70 Wales caps and toured South Africa with the 2009 Lions, joined Perpignan on a three-year deal from Welsh region the Ospreys ahead of the 2011-12 season.

Since making his Wales debut against Argentina in June, 2006 Hook has gone on to play in his favoured fly-half spot, as well as centre and full-back.

At the Ospreys Dan Bigger emerged as a challenger before becoming their regular 10 and it has been a similar case at international level for Hook, who saw Scarlets rival Rhys Priestland, then Biggar overtake him in the fly-half pecking order.

In Priestland's injury-absence in 2012-13, Hook was Biggar's Six Nations understudy, coming off the bench for his last cap in the 30-3 win over England in Cardiff that sealed Wales' title win.

And the Wales second-string that went to Japan also did not include the player, who has switched to full-back for his French club this season.