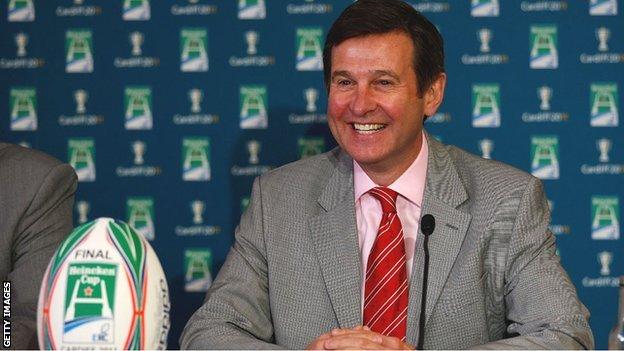 Roger Lewis says it would be a "crazy concept" to get rid of the Heineken Cup in the face of an Anglo-French breakaway.

English and French clubs have confirmed plans to set up a new tournament to replace the European Cup next season.

Speaking after a meeting of European Rugby Cup Ltd, Welsh Rugby Union chief executive Lewis said a breakaway tournament would not be sanctioned.

"It is simply not something that should ever be considered," said Lewis.

But Welsh, Irish, Scottish and Italian teams are allocated slots on an automatic basis with no qualification criteria set via the Pro12 other than the bottom-placed Welsh and Irish teams entering the second-tier Amlin Challenge Cup.

That has led the English and French clubs to the belief that Celtic and Italian teams can afford to rest key players in the Pro12 while prioritising European games.

English and French clubs are also unhappy at the way the tournament's money is distributed.

However, Lewis says the Celtic and Italian teams are prepared to discuss qualification and funding changes.

Lewis said: "We are prepared to look at meritocratic qualification.

"We're prepared to look at how revenues are distributed."

And he remains optimistic an agreement can be reached to secure the future of European club rugby's premier tournament.

which runs the Heineken and Amlin Challenge Cup tournaments.

The English and French clubs gave notice in 2012 of their intention to pull out of the two existing European competitions at the end of 2013-14.

Premiership Rugby, which represents the 12 top-flight English clubs, it had proposed the formation of two 20-team competitions to replace the Heineken Cup and second-tier Amlin Challenge Cup.

But it said "discussions have been unsuccessful and the clubs can only conclude that negotiations on any new European agreement have now ended".

Their proposed new format would include English and French teams and be open to others.

However, the ERC met in Dublin on Wednesday and will convene a meeting to discuss the future of European rugby's premier club competition as soon as possible.

"We've drawn back from the brink and we'll get round the board table to ensure that the best club rugby competition in the world continues," said Lewis.

"It was agreed today [Wednesday] by the representatives of LNR [Ligue National de Rugby] and Premier Rugby that we would sit down and we will continue our negotiations and I suggested that we should introduce an external mediator to help us arrive at a proper resolution.

"It is far too crazy a concept to get rid of what is the best rugby club competition in the world, which is the envy of the rugby world and which generates fantastic games of rugby - but also considerable revenues for all of the partners.

"This is something that cannot be contemplated, it is completely off the scale.

"We have to put the egos to one side and common sense has to prevail."