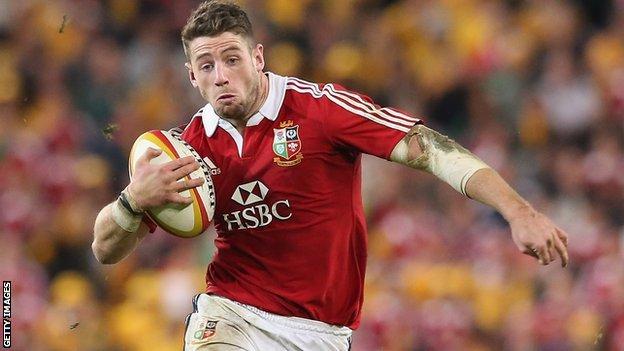 Cardiff Blues' British and Irish Lions Test wing Alex Cuthbert will return to their starting line-up against Connacht in the Pro12 at the Arms Park on Friday.

The game will be broadcast live by Scrum V on BBC Two Wales and on the BBC Sport website.

However, Cuthbert's fellow Blues and Lions Sam Warburton and Leigh Halfpenny remain on the sidelines.

And 2009 Lion Gethin Jenkins also continues to be an absentee.

Another backs change is Tiernan O'Halloran's inclusion in place of rested Fionn Carr.

Lions tour skipper Warburton missed the third-Test win against Australia that gave the tourists a 2-1 series win because of a torn hamstring.

Flanker Warburton's return date has yet to be determined.

Man-of-the-Series Halfpenny's extended post-tour rest is expected to end when the Blues host Italian side Zebre in the Pro12 on Friday, 20 September.

However, prop Jenkins, an original 2013 Lions tour member who was before having a chance to play, is again denied a playing return.

Three of the Ospreys' 2013 Welsh Lions were back in action on the Pro12's opening weekend when Adam Jones, Richard Hibbard and Ian Evans played their part in beating Treviso in Italy.

Former Blues, Wales and Lions flanker Martyn Williams has over when their 2013 Lions tourists should return amid concerns over player burn-out.

But Faletau's former Dragons' team-mate Dan Lydiate and ex-Blues centre Jamie Roberts have been involved in French Top 14 action since their season began in August for Racing Metro.

Likewise scrum-half Mike Phillips has turned out for Bayonne and wing George North made his full Northampton debut in their 38-11 Aviva Premiership win over Exeter last weekend.

Scarlets centre and joint captain for 2013-14 Jonathan Davies has yet to be named in match squad.

And the Ospreys have not indicated when skipper and lock Alun Wyn Jones and flanker Justin Tipuric will return following their efforts down under.